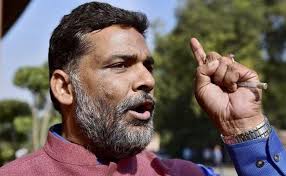 PATNA: Bihar politician Rajesh Ranjan alias Pappu Yadav was fined on Thursday for driving without a valid license a tractor trolley full of garbage that he threatened to dump in front of a state minister’s residence in Patna, police said.

Mr Yadav, a controversial former MP who has floated the Jan Adhikar Party (JAP), said he did this in protest against the state government’s “failure” to check the outbreak of dengue, which has afflicted more than 200 people in the city since the beginning of this month when heavy rain had left many pockets water-logged for several days.

The police said he was stopped and fined Rs. 5000 as he was carrying a license to drive light motor vehicles, which was expired in 2017, and not one to drive heavy vehicles.

“I have been deprived me of my fundamental right to register a protest. I have a license but they have come up with the challan on a flimsy ground that the one I possess did not qualify me for driving a heavy vehicle,” Mr Yadav said.

The JAP leader who had hogged the limelight when he moved on boats through the water-logged streets distributing food, drinking water, clothes and money a fortnight ago, collected trash from densely-populated localities and loaded it in the tractor trolley with the help of his supporters.

Mr Yadav also sprinkled bleaching powder at garbage dumps after collecting the waste to underscore that the authorities concerned were not doing enough to control the outbreak of vector-borne diseases.

He was, however, stopped a few kilometres ahead of the residence of Urban Development Minister Suresh Sharma by the police.

The men in uniform asked the former MP to furnish his driving license and handed over a challan to him and he failed to produce a valid one, police said.

“I would have derived no pleasure out of throwing dirt at the doorstep of the minister. But I did want him to have a feel of the hellish condition in which the people of the city are living,” Mr Yadav told reporters.

This was a ploy to deter him from lending his voice to the people of Patna who have been suffering, Mr Yadav claimed.

“This government has skewed priorities. It splurges billions of rupees on publicity while hospitals lack the kit used to transfuse platelets for want of funds,” he alleged.

“I will, however, keep raising my voice against the government”s insensitivity in whatever way it is possible. I shall also purchase a platelet transfusion kit from my own resources and donate it to the IGIMS (Indira Gandhi Institute of Medical Sciences) hospital here,” Mr Yadav declared.