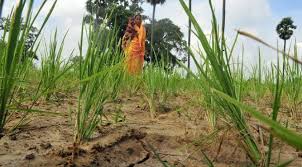 Patna: A long dry spell during the ongoing “shrawan” month is worrying Dinesh Mahto and Nagendra Yadav. Both the farmers are disappointed with the poor monsoon so far, as they are yet to transplant paddy saplings due to lack of water.  Both Mahto and Yadav are marginal farmers in Paliganj of Patna district and are fearing another drought this year. “We are certain of another sukha(drought) because the rain god is giving us sleepless nights this time like last year.”Mahto said.

Yadav said this has become an annual problem as farmlands turn dry due to lack adequate water for transplantation of paddy seedlings. “We are still hopeful of rainfall,” he added.

Mahto and Yadav are among millions of farmers, nearly two-thirds of Bihar’s population of 10.5 crore, who are dependent on agriculture for their livelihood.

Not only that, nearly two-thirds of all agricultural activity in the state is dependent on the rains .For most of the state’s population, therefore, a good monsoon is often the difference between life and death.

The Bihar government has targeted paddy cultivation on 33 lakh hectares this year. But till date, paddy transplantation has been reported on less than half of the target.

Bihar Agriculture Minister Prem Kumar on Friday expressed concern over the drought like situation in 22 of 38 districts of the state. “The state government has so far not declared any district drought-hit. If the dry spell continues till August 15, the government will decide whether to declare the number of districts as drought-hit”, he said.

He said the government will hold a meeting on August 18 on the drought situation. “We are keeping a close watch on the drought-like situation this time like last year”, he added.

Kumar said “if there is no rainfall in next five to six days, the government will prepare to face drought and will declare the state drought-hit any time after August 15”.

An official in chief minister office told NewsClick that Bihar chief minister Nitish Kumar had instructed top officials to prepare data to declare the number of districts drought-hit, as it has become a stark reality.

Bihar’s is facing a drought-like situation because of a peculiar situation, as monsoon rainfall has remained confined to 16 districts, resulting in floods, while there is deficit rainfall in 22 districts, according to officials.

Agriculture and weather experts have advised the government to wait till the end of second week of August for rainfall before declaring the state as drought-hit.

Like millions of farmers, the state agriculture minister is also hopeful that Bihar may receive rainfall in the next 48 hours in view of the cloudy weather and reports of light rains in few places in the past 24 hours.

According to officials of agriculture department, poor rainfall had affected paddy sowing and plantation, triggering fears of another drought.

Agriculture is the backbone of Bihar’s economy, employing 81% of the workforce and generating nearly 42% of the state’s domestic product, according to the state government’s figures. About 76% of Bihar’s population is dependent on agriculture for livelihood.

Reports reaching in Patna said unlike in the past, there was no water for irrigation in the canals. A large part of central Bihar is irrigated by water from the Sone river, brought in through canals.

Meanwhile, a few farmers have managed to save paddy crops transplanted last month by pumping ground water and others, too, are trying this for now.