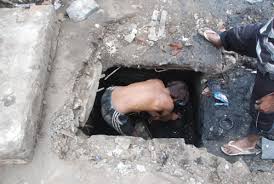 Muzaffarpur: Four persons of a family died of asphyxiation inside a newly-constructed septic tank at a village in Bihar’s Muzaffarpur district on Tuesday, an official said.

The incident occurred at Madhuban Kanti village under Bara Bharti panchayat of Minapur block this morning when a man, who went to remove the scaffolding of the newly-built septic tank, fell into it accidentally, Sub-Divisional Magistrate (East) Kundan Kumar said.

He died of suffocation after inhaling toxic gas. Another three persons of the family, who rushed to save the first one, entered the tank and also died of asphyxiation, Kumar added.

The deceased were identified as Madhusudan Sahni, Kaushal Kumar, Dharmendra Sahni and Veer Kumar Sahni, he said adding that all of them could be in the age group of 30-35. The bodies were sent to Sri Krishna Medical College and Hospital here for postmortem.

Minapur Circle officer Gyan Prasad Srivastava announced that an ex-gratia of Rs 4 lakh would be paid to the next of kin of those died in the incident.