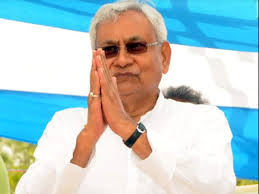 Bihar Chief Minister and JDU national president Nitish Kumar is to address a public meeting in State Capital on August 25, starting the political campaign of his party in Jharkhand. JDU which is partner of NDA in Bihar and playing the role of big brother in Bihar had already expressed its intention to contest year-end Assembly election alone in Jharkhand.

JDU Jharkhand unit president and former MP, Salkhan Murmu said, “As the party has announced to contest Assembly election alone in State, we have started preparations for the election. In this connection Bihar Chief Minister Nitish Kumar is to address a public meeting in Ranchi on August 25.” Murmu further said, “The party has given a slogan, Nitish Lao, Jharkhand Bachao (Bring Nitish, Save Jharkhand).”

The JDU leader claimed that under the leadership of Nitish Kumar, Bihar has witnessed all round development in all sectors. Improvement in law and order, women empowerment, and improving education are some of the sectors on which Bihar has made drastic changes.

The JDU has decided to reach to people in State with the Nitish Kumar’s development model.

The party cadres will reach out to people especially in rural areas how Bihar has witnessed a turnaround after Nitish Kumar came to power in Jharkhand.

The JDU cadre will also go to people highlighting the weak Opposition in State. Murmu said, “After the Lok Sabha election, all Opposition parties are decimated. The JMM’s politics revolves on father and son duo. There is no internal democracy in JMM. While the grand old party, Congress is struggling for survival as the party is pitched in internal struggle.”

Murmu said, “After the Lok Sabha  election, there is two factions in Congress party. One group is lead by State president Ajoy Kumar while the other group is headed by Subodh Kant Sahay and others.” According to JDU leader, in such situation, JDU has huge scope in Jharkhand as people are looking for an alternative party which can counter BJP.

To strengthen party in Jharkhand, the JDU has decided to make at least six members from every village. Murmu, who first became MP in 1998 under the banner of BJP, has always been advocating the cause of the tribals.

“We are dedicated for the progress of the tribals so our focus would be on them. Our party cadres and leaders have started working in the rural belts to make the voters realize their importance and need to safeguard their interests,” he noted.

which are related with tribal sentiments. “The JDU will also work for protecting and safeguarding the tribal interest as the successive Governments has failed to hand over the land rights to the tribals

and ensure their adequate representation in the government jobs,” added Murmu.