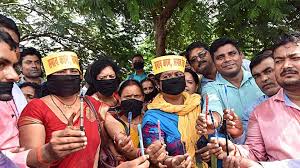 In the face of an agitation by teachers seeking salary hike on the Teachers’ Day, Bihar chief minister Nitish Kumar gave them a stern message as well as hope of a salary hike in the near future.

Kumar asked the teachers to shoulder their main responsibility of teaching with sincerity first, as it was only his government that would do something for them, like in the past. “Don’t worry, we will do whatever is to be done, not others, who are these days joining your dharna. If you deserve, we will be happy to do it for you,” Nitish said, while taking a subtle dig at the opposition parties supporting the agitation.

Reminding them of a reversal at the hands of the Supreme Court earlier this year after a long legal battle and teachers’ condition prior to 2005, when Shiksha Mitras were appointed for a meagre Rs 1500, Kumar said he was not worried about demands raised by the teachers or his criticism, as it was their democratic right, but hoped that they never lose sight of their main role.

He also indirectly hit out at the opposition for allegedly fanning the stir after having called them “incompetent” earlier and also having blamed them for “destroying education”. “I always said that the teachers are competent. I have always stood by the teachers. I respect the teachers. And all I can assure you on the Teachers’ day is that in the future also, only we will do something, not those giving lip service,” Nitish said.

Ahead of the 2015 assembly polls, Bihar government had announced a new pay-scale for the school teachers following their long agitation.

On the occasion, he also launched the “Unnayan Bihar” programme, modelled on the lines of highly successful ‘Unnayan Banka’ project, for class 9-12 in all secondary and higher secondary schools run by the State. The programme involves use of information technology as supplement to classroom teaching to make learning more interesting and receptive.

Kumar said that from April 2020, all the panchayats in the State would have a secondary school starting with Class 9 and equipped to run the ‘Unnayan Bihar’ programme. “In the field of education, Bihar has done a lot with over 99% enrollment, major drop in the gender gap and a slew of other initiatives including huge infrastructure development, but the quality of education remained a concern. It is a global concern and that is why teachers’ role becomes important,” he added.

Kumar said that an intervention by the government will come at an “appropriate” time if the teachers did their job with “sincerity”. “All I expect from you is that you should shoulder your responsibility sincerely, as my commitment is to people. You raise your demands, but at the same time you also teach. Only demand will not do, certainly not if it is at the cost of teaching,” he added.

He also asked chief secretary Deepak Kumar to see what could be done for the teachers, hinting that another pay hike for teachers was under government’s consideration.

“When my government came to power, we had to make large-scale recruitment. We did so with a fixed pay of Rs 4000-7000, but later increased it and in 2015 put teachers on a pay-scale. In 2017, we also announced 7th pay commission benefits. Still, if I have to face criticism, I humbly take it in my stride. But be sure, only we will do it again,” he said.

The CM also honoured 20 teachers from across the state on the occasion. Despite protests by the teachers, all of the awardees turned up to receive the honour.

The awardees welcomed the CM’s speech, especially the hint to increase their salaries, some of the teachers, however, lamented the absence of any acclaimed teacher or eminent academician on the dais on the Teacher’s Day.