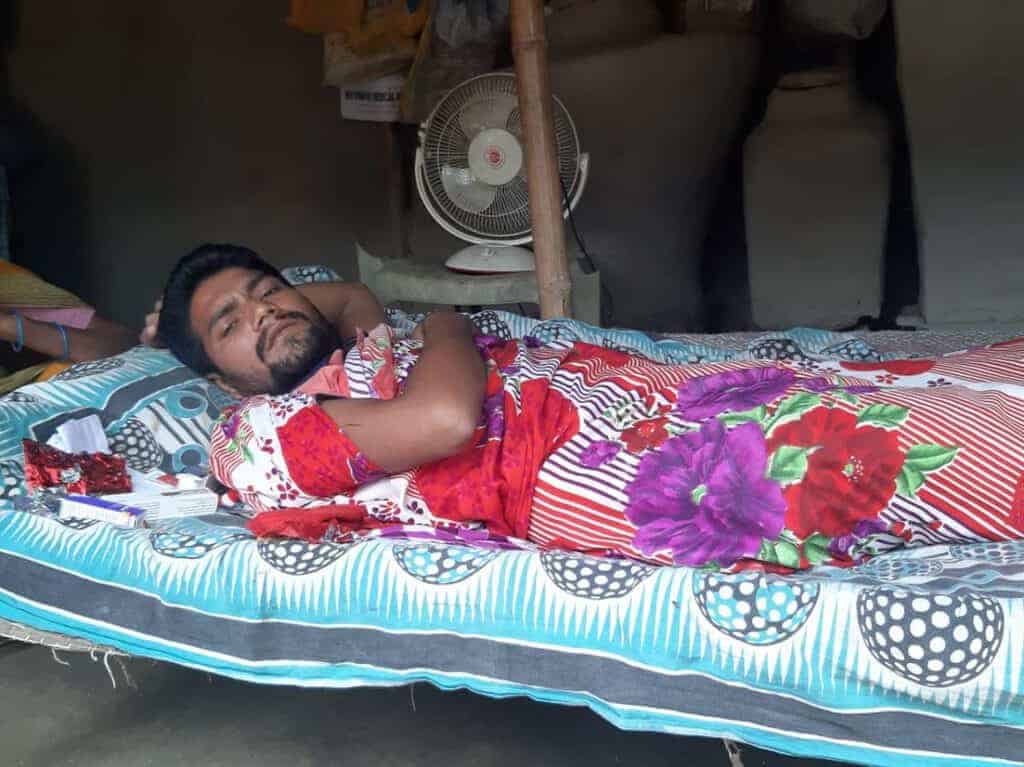 Katihar, Bihar: It has been almost a month since the incident but 25-year-old Saddam Hussain’s injuries haven’t healed. He shows the marks on his back and says, “Where is justice, sir? Where is it? The Constitution talks about justice but a poor person cannot get justice. 20 days ago, the goons tied me up and thrashed me with hammers and iron rods. When I was thirsty, they forced me to drink urine. And when the police came, what did they do? I was taken to Manihari police station and locked up. I was  writhing in pain and begging them to take me to a hospital.”

Since being released from custody, Saddam spends most of his time on a cot in his house in Naya Tola village in Manihari. The injuries on his back and legs still look fresh.

In the din of election, many stories were lost. Saddam’s story is one of them. On May 10, some local goons abducted Saddam and brutally beat him up, and allegedly even forced him to drink urine. Motive — a land dispute. Both sides filed FIRs against each other and the police arrested one person from each side. Saddam was arrested for allegedly setting fire to his attackers’ house.

His mother, Nargis Fatima, tells us, “Saddam has opened a clinic nearby. On that morning, he had come home to fetch a syringe. He was returning to the clinic when those men kidnapped him. They took him to their house and thrashed him brutally.”

She shows a torn, blood stained pair of jeans. “I’ve kept a roza, I can’t lie. The son of Feku Karmakar (the second party to the land dispute) hit me with a lathi twice. He hit me on such a place on my body that I couldn’t even show it to anybody. I was screaming but the police didn’t let me see my son.”

Saddam says that after he was assaulted, he was picked up by the police and detained at the Manihari police station. When his condition started deteriorating, he was taken to the sub divisional hospital which referred him to the Sadar Hospital, Katihar.

Saddam’s cousin, Mohammad Wasim (25), shows pictures on his mobile phone and says, “Saddam was in the hospital for four days. He was handcuffed by the police for all of those days. When he recovered, he was arrested and locked up again. What is justice when the victim is arrested and the criminals roam freely?”

Wasim, who works as a labourer in Delhi’s Palam area, adds, “This land dispute dates 12 years. For the last three years, during the month of Ramzan, these people beat up someone in our family. This time, Saddam was targeted. When I was barely 14 years old, they lodged a malicious FIR and I was jailed. I’ve been witnessing this dispute since then. The administration appears to discriminate on religious basis each time. A false case is registered against us even before we can go file a complaint at the police station. Where do we go?”

Saddam Hussain’s father Abdul Sattar (52) has four brothers — Abdul Razzak (55) is the eldest and Abdul Rauf (50) and Abdul Sobhan (40). 50 years ago, their father Izabul Haq had purchased 66 dismil land in Naya Tola Bahadurpur from Nandkishore Dubey and Sudama Dubey. Since then, they have been paying land tax and getting receipts for the same

Abdul Rauf explians, “The Dubey family left after selling the land. Then, during a survey, it was found that the land was 99 dismil and not 66. We thought that 66 dismil is ours, the remaining 33 should be left vacant for the Dubey family for when they return. Why should we be dishonest. For the remaining land, we even got the receipts issued once so that their land is safe. But in 2007, matters got complicated. When we go to get another receipt issued in Nandkishore Dubey’s name, the official told us that the land has been reduced by 14 dismil. When I asked why, he said that a Basgit parcha ( which is issued by the Collector to a landless person as per the rules laid down in the Bihar Privileged Persons Homestead Tenancy Act 1948) had been issued on this.”

He adds, “We asked in whose name the Basgit parcha has been issued. He said Feku Karmkar, Baijnath Karmkar, Dilip Karmkar and a temple. When we inquired about this at the block level, there was no record of this Basgit parcha. They’ve managed to get a fake parcha issued but it does not mention the boundary. It only mentions the boundary for two sides, there is nothing written for the boundary on the remaining sides.”

Abdul Razzak says, “To avoid any trouble, we filed a title suit in 2007 itself. We had all the evidence then. We even recorded our statements in the court. We asked the Karmakar family to present their evidence in the court but in 12 years, they haven’t managed to submit any receipts. Now, they are forcibly constructing houses on even our land. How can we let this happen?”

Multiple cases related to this dispute have been registered at the Manihari and Amdabad police stations against Saddam’s family. Local administration has been unable to resolve the matter.

Rauf further says, “We don’t want to go to the police station to file a complaint because whenever we go, they lodge an FIR against us only,” adding, “You can see the pattern in the serial number of the FIRs. If the FIR filed by me is serial no. 65, then their FIR would say serial no.66…If mine is 151, theirs will be 152. Meaning — a counter case for each case we file. Sometimes, when we reach the police station to file a complain, we find that an FIR has already been lodged against us and the police arrests us immediately. Hence, now we will file a court case only. We no longer have any faith in the administration.”

However, the Karmakar family puts the blame on the Saddam’s family. Baijnath Karmakar says, “The claim of making him drink urine is completely false. At 8-9 am in the morning, how can one be thirsty? These people have been troubling us since 2007. They even hurl stones at our house.”

When we asked him about submitting evidence in court, he said, “What evidence can we give for a Basigat parcha. The government says that we give the land for you to live on it, not for fighting legal battles. We are only following up on the title suit that they (Saddam’s family) have filed.”

NewsCentral24x7 contacted Manihari police station. Officials there said that the matter is entirely that of a land dispute. There is no mention of the urine incident. The FIR has been lodged on the basis of the victim’s statement only. We even arrested one person from each side. The matter has been hyped up.

However, Saddam disagrees. He says that his statement was not recorded when he was in the hospital. The police had already prepared an FIR and he was made to only sign it. “I am asserting repeatedly that injustice has been done to me. But when the police arrests the victim, what is left to say? What justice should I expect now. This is not justice, sir. This is is not justice.”