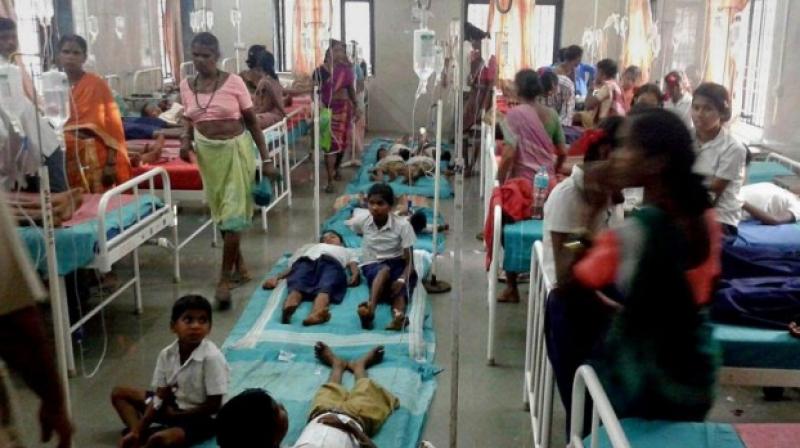 At least 14 children have died in Bihar’s Muzaffarpur due to Acute Encephalitis Syndrome (AES) and over a dozen have been admitted to different city hospitals with high fever and other symptoms of the disease, news agency ANI reported. Sunil Shahi, Superintendent of Shri Krishna Medical College and Hospital (SKMCH), Muzaffarpur, confirmed the death toll and number of children admitted to the hospital with symptoms of encephalitis this year.

“We have received 38 patients so far, most of them have a deficiency of glucose in their blood. The overall casualty till now is 14,” he said. Encephalitis is a viral infection which causes fever and headache. It causes a sudden loss in the level of sugar in the body and affects the life-supporting function in a minor’s body. This time, the outbreak has gone beyond the limits of Muzzaffarpur with many children being diagnosed with the syndrome in Vaishali, Sheohar as well as the East and West Champaran districts.

State Health minister Mangal Pandey said that all efforts are underway to bring the situation under control. “All arrangements have been made to check the outbreak of the disease,” he said.

Dr Gopal Sahni, head of Critical Care Unit at SKMCH said that the outbreak is mostly reported just ahead of the arrival of Monsoon when heat and the humidity rise. The humidity level has hovered around 50% in Muzaffarpur for the last few days while thge tempertaure stayed around the 40-degree mark.

Muzaffarpur Civil Surgeon Dr SP Singh said that a team of health department recently visited the SKMCH and held a high-level meeting with doctors on the outbreak.

The epidemic impacts children every year in the north Bihar and eastern Uttar Pradesh regions. According to UP government’s claim, 187 deaths were reported due to encephalitis in 2018 against 553 such deaths in 2017. In Bihar, it claimed over a dozen lives.