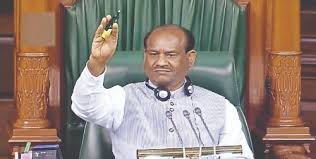 New Delhi: In a historic move, Lok Sabha Speaker Om Birla initiated a process of archiving the speeches of all Lok Sabha members and ministers since 1952. When asked, the Speaker told the Millennium Post exclusively that the availability of the video footage and the audio discs were the main concern now.

However, this work is also time-consuming. The presiding officer of the Lower House (Lok Sabha Speaker) confirmed that the entire process would take three months.

Earlier only Prime Ministers’ speeches were archived. This move will create a real political history of our country. Reportedly nearly 500 MPs have passed away in the last fifteen years, 25 of them belonged to India’s first Lok Sabha.

Much later, the Lok Sabha TV and Rajya Sabha TV were launched. In 2006, DD Lok Sabha was replaced by LSTV, a 24-hour TV channel broadcasting in Hindi and English, which is owned and operated entirely by the Lower House itself. Former Lok Sabha Speaker and Left stalwart Somnath Chatterjee who launched it. Later in 2011, the Rajya Sabha TV started the coverage of the proceedings of the Upper House.

The archive will help in understanding the historic discussions on the floor of the Houses. Hence, once this archiving takes place, the entire political history since 1952 will be readily available to the common people. The audio and video recordings will further remove the confusion about what stand or the position different political leaders from different political parties have taken on different issues in our political history, whether the negotiations that took place between the treasury and opposition to build consensus on GST, right to education, land acquisition, or the recent insolvency and bankruptcy laws, triple talaq, rescinding of Article 370 from Jammu and Kashmir and others.

However, the government has not communicated any official version yet. Earlier, Prime Minister Narendra Modi announced a museum dedicated to all former Prime Ministers. The deadline to complete the ‘Museum on Prime Ministers of India’ is March 2020.

Sources said the iconic speeches, delivered by the former External Affairs Minister and an eloquent speaker of Bharatiya Janata Party, Sushma Swaraj, who passed away on Tuesday, is on the priority. The recent years saw the demise of several Indian political stalwarts. On August 13 in the last year, former Lok Sabha Speaker and Left veteran Somnath Chatterjee and three days later, on August 16, former Prime Minister Atal Bihari Vajpayee passed away, who had served Parliament, both in the Lok Sabha and the Rajya Sabha twelve times.

This year, George Fernandez, the defence minister during the Kargil War and nine times MP in Lok Sabha, passed away in January. After that, the demise of Ram Chandra Paswan in the last month and Sheila Dikshit, the former Delhi chief minister and former LS MP from Kannauj passed away in the last week.