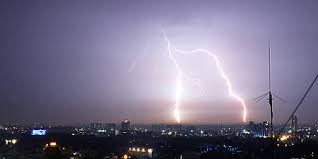 At least 23 people were killed and three others injured in lightning strikes in Bihar and Jharkhand, police said on Wednesday.

Thirteen people died in Aurangabad, East Champaran and Bhagalpur districts of Bihar, while in Jharkhand, 10 people lost their lives in Jamtara, Ramgarh and Pakur districts.

The deaths in lightning strikes occurred since Tuesday night, police officials said adding that three persons were injured in Jharkhand.

In East Champaran, two persons, including a 13-year-old girl, died in their sleep when lightning struck the asbestos roof of their house in Patpariya village under Mofussil police station limits, the Station House Officer (SHO) Manish Kumar said.

Two others were killed in Gobindganj and Kotwa police station areas in lightning strikes in the morning.

A couple of more persons lost their lives at Sanokhar and Amanda police station areas in Bhagalpur district on Tuesday night, police said.

Unconfirmed reports, however, claimed that over 30 people were killed in the rain-hit state.

The state disaster management department said Bihar has received an average rainfall of 28.9 mm on Wednesday, which was 221 per cent above normal.

All of them were returning after taking a bath at a nearby pond when it started raining. They stood under a road bridge when lightning struck them.

A 60-year-old woman also lost her life at Bindapathar village in Jamtara, the circle officer said.

In Ramgarh district, two persons were killed and as many injured when lightning struck them at Chikor village. They were watching a cricket match standing under a tree when the incident happened, Patratu sub-divisional police officer Prakash Chandra Mahto said.