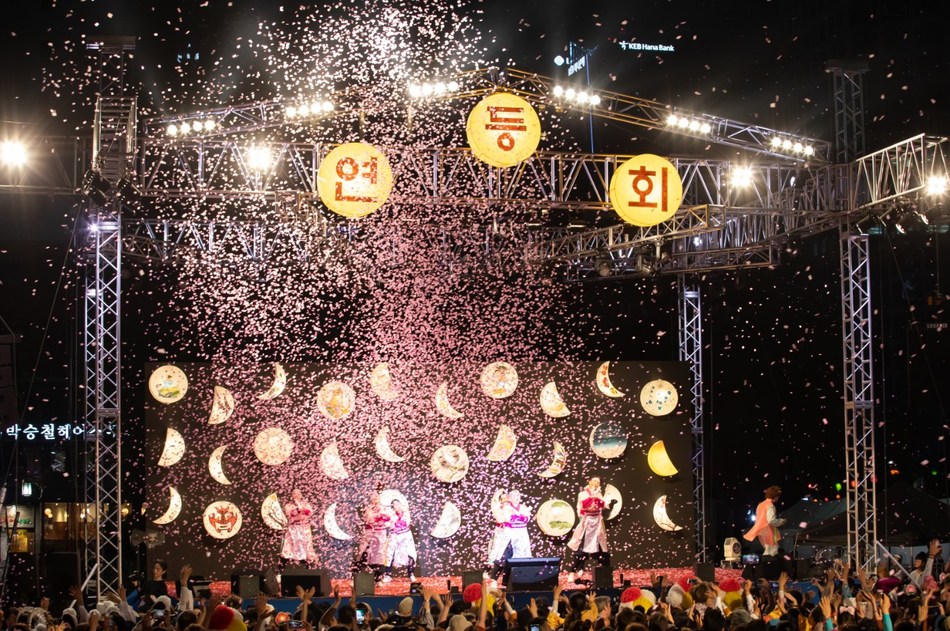 SEOUL, South Korea, June 18, 2019 /PRNewswire/ — The 2019 Lotus Lantern Festival called YeonDeungHoe, one of Korea’s traditional annual events and Intangible Cultural Property No. 122, has been successfully held with more than 400,000 Buddhists, citizens, foreign residents and visitors participating and enjoying the festival together.

To celebrate Buddha’s birthday and wish for peace, this year’s Lotus lantern festival took place from May 3 to 5, with a variety of programs including lantern parade and traditional cultural events.

During the festival, about 100,000 beautiful lanterns brightened Seoul’s night sky, delivering the wishes of temples and organizations that had prepared the lanterns for the last one year, and giving warm energies to people’s hearts.

A wide variety of colorful lanterns, such as 4 Buddhist instrument lanterns and Bodhi tree lanterns (grande lanterns) which symbolizes Buddha and his birth, Taegeukgi (the Korean flag) lanterns and star lanterns, had attracted people’s attention. During the Hoehyang Hanmadang, which combines the splendid, majestic energy and passion of the lantern parade, both Koreans and foreigners expressed their joy by enjoying the “flower rain” from the sky and traditional performances as well as fast beat music of EDM.

On May 5, which is Children’s Day in Korea, Traditional Cultural Events featured six themes: “youth and children,” “international,” “NGO,” “food,” “tradition” and “sharing.” Several programs for kids were prepared, such as traditional ring toss and a game of ttakji-chigi, or slap-match. Surprisingly, Buddhist monks gave presents to children on the streets, which was very popular among kids.

In the “Lotus Lantern-Making for foreigners”, around 200 foreigners participated and made colorful lanterns with a unique harmony of colors, while participants’ children also enjoyed Korea’s Children’s Day by playing yut, a traditional board game, and jegichagi, Korean shuttlecock game, for the first time.

Yeondeungnori started with grande lantern parade led by the festival’s global supporters and small-sized parade by Yeonhui Group. It was full of happy energy with a variety of performances and ended with promise for the next year’s lotus lantern festival (YeonDeungHoe).

Exhibitions of traditional lanterns held in Jogyesa Temple, Bongeunsa Temple, and Cheonggyecheon Stream were also successful. The beautiful lanterns that had shone with the lantern festival will be even brighter in the next year. Next year’s Lotus Lantern Festival is scheduled to take place from April 24 to 26, 2020.