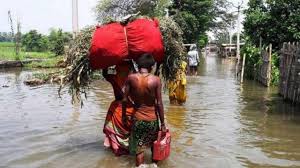 t was only one month ago that the administration was forced to impose Section 144 of the Code of Criminal Procedure (CrPC) in many parts of Bihar including Gaya, Begusarai and Darbhanga. The reason, as you may think, was not violence or a security threat. The restriction was imposed due to the heatwave. Now a month later, the administration has imposed Section 144 again – this time in Motihari, due to heavy rains.

The prohibitory orders were imposed on Friday. The administration has also asked all the schools to remain shut for two days. This is the first time that Section 144 has been imposed because of rain.

Earlier in June, Section 144 was imposed in six districts of the state — Gaya, Begusarai, Darbhanga, Gopalganj, Madhubani and Sitamarhi. People were ordered not to step out of their houses between 11 am to 4 pm. The severe heatwave had claimed over 100 lives in Bihar in one month.

Monsoon has hit several states and India received 28 per cent more rainfall than the 50-year average in the week to July 10, data from the India Meteorological Department (IMD) showed. Parts of northern and eastern India received heavy showers, while in the northeastern state of Assam three persons were killed in rain and flood-related incidents and over 2 lakh people across 11 districts have been affected by the deluge.

Incessant rainfall for the past five days has triggered flash floods and landslides in several places in Meghalaya, causing damage to infrastructure and crippling normal life. Heavy rains had also slowed down Mumbai city.

Meanwhile, New Delhi had overcast conditions and the weather department has predicted only very light rains during the next two to three days.

The India Meteorological Department has said the states such as Uttarakhand, East Uttar Pradesh, Bihar are likely to witness heavy rainfall on Friday.