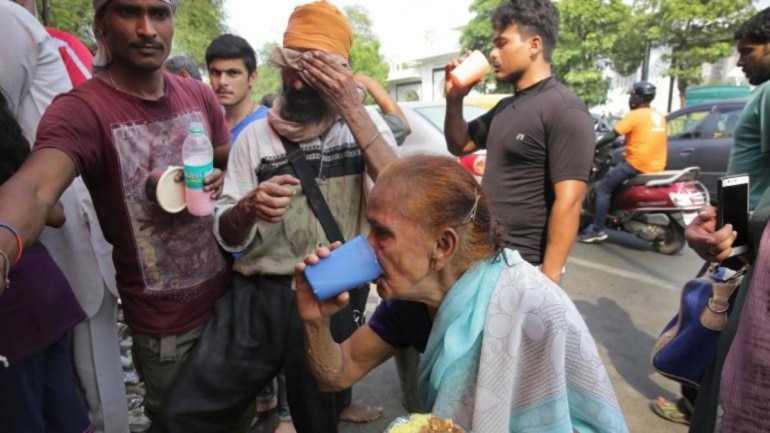 The weather in India has been difficult for the population of the country with the heatwaves dominating the weather for the past few weeks. According to reports, there have been 32 heatwaves this year in India, the second-longest spell of high temperatures in the country’s recorded history. The heatwave conditions prevailing in most parts of the country has claimed at least 44 lives in Bihar in a day, even as rain brought down the mercury in some western and northern states on Sunday.

Here are the weather conditions in various states

1. Rain and thunderstorm has been predicted on Monday in Uttar Pradesh, where sweltering heat continued unabated with Allahabad in the eastern part being the hottest at 45.3 degree Celsius, six notches above the normal. Sultanpur, Varanasi and Basti in the state recorded 45 degrees Celsius, 44.2 degrees Celsius and 44 degrees Celsius respectively.

2. Blistering heatwave condition continued unabated in Bihar, where at least 61 people died on Saturday. The state government has ordered closure of schools till June 19. According to officials, 22 people died in Aurangabad, 20 in Gaya and two in Nawada districts due to the heatwave. Chief Minister Nitish Kumar has expressed grief over the deaths and announced an ex gratia of Rs four lakh for the next of kin of the victims.

3. In Delhi, traces of rain and strong wind reduced the daytime temperature which settled at 36.3 degrees Celsius, three notches below the normal. The weatherman has predicted overcast conditions and thunderstorm accompanied with light rains on Monday.

4. Parts of Rajasthan witnessed rain since Saturday, bringing respite from the sweltering conditions. The state capital recorded 9.2 mm of rains on Sunday, the meteorological department said. Bhim in Rajsamand gauged 7 cm of rains followed by 4 cm in Tibi of Hanumangarh and 3 cm each in Chirawa, Sri Ganganagar, Hanumangarh and Sangaria since Saturday.

5. Similarly, rainfall in Ahmedabad and rest of Gujarat brought respite from the scorching heat. The maximum temperature in Ahmedabad hovered around 37 degree Celsius, the IMD said. North Gujarat and Saurashtra-Kutch regions are likely to receive heavy rain on Monday under the influence of Cyclone Vayu, the MeT department said. On Sunday morning, the cyclone remained centred about 470 km west-southwest of Porbandar, 440 km southwest of Dwarka and 545 km southwest of Bhuj, the India Meteorological Department (IMD) said in a bulletin.

Monsoon is expected to advance further up north as Cyclone Vayu loses intensity paving the way for the wind system to move towards the Arabian Sea, the weatherman said Sunday.

6. By now, monsoon should have reached the central India, including parts of Madhya Pradesh, Rajasthan, eastern Uttar Pradesh and Gujarat, but it is yet to reach Maharashtra. It still remains over Mangalore, Mysore, Cuddalore over the southern peninsula and Passighat, Agartala in the northeast, according to the India Meteorological Department.

7. The western coast – from Maharashtra to Gujarat – has been receiving rainfall due to the cyclone. Only coastal Karnataka and Kerala have received rains due to monsoon.

8. Monsoon is likely to set in in Telangana around June 20 and in Andhra Pradesh by June 18, according to the India Meteorological Department (IMD).

9. The public in Tamil Nadu has been advised not to expose themselves to direct sunlight between 11.00 am and 4.00 pm to avoid sunstroke, a Regional Meteorological Centre has said. Chennai and its neighbouring areas and several other northern districts in Tamil Nadu have been reeling under heatwave-like conditions for the past several days with the mercury hovering over 41 degree Celsius.

10. This year’s heatwave has not even spared the Himalayan state of Jammu and Kashmir. Jammu recorded a maximum temperature of 39.6 degrees Celsius on Sunday, the weatherman said.

11. The weather remained mainly dry in Himachal Pradesh on Sunday even as the maximum temperature fell by 3 to 4 degrees from normal, Shimla MeT Centre director Manmohan Singh said.

12. Some states experienced pleasant conditions with little to moderate rain. Sirsa, Fatehabad, Mahendergarh in Haryana and Amritsar, Gurdaspur and a few other areas in Punjab received welcome showers.

According to meteorological department forecast, light to moderate rain is likely at a few places on June 16, 17 and 18 in Haryana, Punjab and Chandigarh. Meanwhile, four people, including two brothers, were killed in separate incidents of lightning strike during rain and thunderstorm in northern part of Chhattisgarh on Saturday, police said.