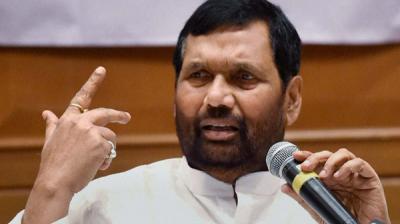 Ram Vilas Paswan was declared elected and the certificate was handed over to him, Bateshwar Nath Pandey, the Returning Officer and secretary to Bihar Legislative Assembly, told PTI.

The certificate of election was given to Ram Vilas Paswan in presence of a host of senior NDA leaders including Deputy Chief Minister Sushil Kumar Modi.

The Lok Janshakti Party chief has been elected to the Upper House in a by-poll necessitated after the resignation of his cabinet colleague Ravi Shankar Prasad, who got elected to the Lok Sabha from the Patna Sahib seat in the recently concluded 2019 general elections.

This is the second time that Ram Vilas Paswan, who began his political career as a Sanyukt Socialist Party MLA in the 1960s, has been elected to the Rajya Sabha.

Ram Vilas Paswan’s previous election to the Upper House was in 2010 when he entered the Parliament with support of his then ally the Rashtriya Janata Dal (RJD) a year after having lost his Hajipur Lok Sabha seat.

Ram Vilas Paswan resigned from the Rajya Sabha in 2014, two years ahead of the expiry of his term, when he wrested back the Hajipur contesting as an NDA candidate.

Ram Vilas Paswan had announced his decision not to contest the Lok Sabha polls this time and to choose the Rajya Sabha route instead when the NDA in Bihar, comprising BJP, Chief Minister Nitish Kumar JD(U) and LJP came out with its seat-sharing plan last year.

The Hajipur seat, which he won a number of times, on a couple of occasions with a record margin, has been retained for his party by Ram Vilas Paswan’s younger brother and state LJP president Pashupati Kumar Paras.