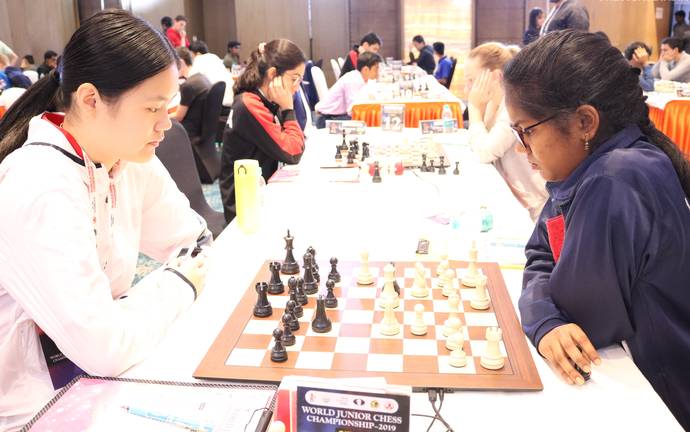 In chess, the four-digit rating of a player is reflective of his/her playing strength. On Friday, top seeds in both sections of the World Junior Chess Championship ran into far lesser-rated Indian rivals and fell well short of playing to their strengths.

The world’s top-ranked junior girl, China’s Zhu Jiner (2507) crashed to demoralising defeat at the hands of 73rd seed V. Toshali (1868). The fate of the top seed in the open section, Iran’s Amin Tabatabaei (2642) was a shade better when he managed to draw with a gritty Rithvik Raja (2369).

Toshali, an 18-year-old second year student from Visakhapatnam, produced a flawless performance to pull off the biggest win for an Indian in the competition. This 28-move shut out a player rated 639 points higher was the surprise of the day.

If Zhu Jiner was looking for a hat-trick of wins following her shock second-round defeat, Toshali was looking to recover from the loss in the previous round.

“Perhaps, Zhu underestimated me at some point and did not play accurately,” said Toshali following the analysis of her game and continued, “I did take a bit more time but my calculations proved perfect. I don’t remember beating such a strong player.”

Rithvik Raja made light of a rating difference of 273 points to hold a struggling Tabatabaei in 58 moves following an endgame involving knight and pawns.