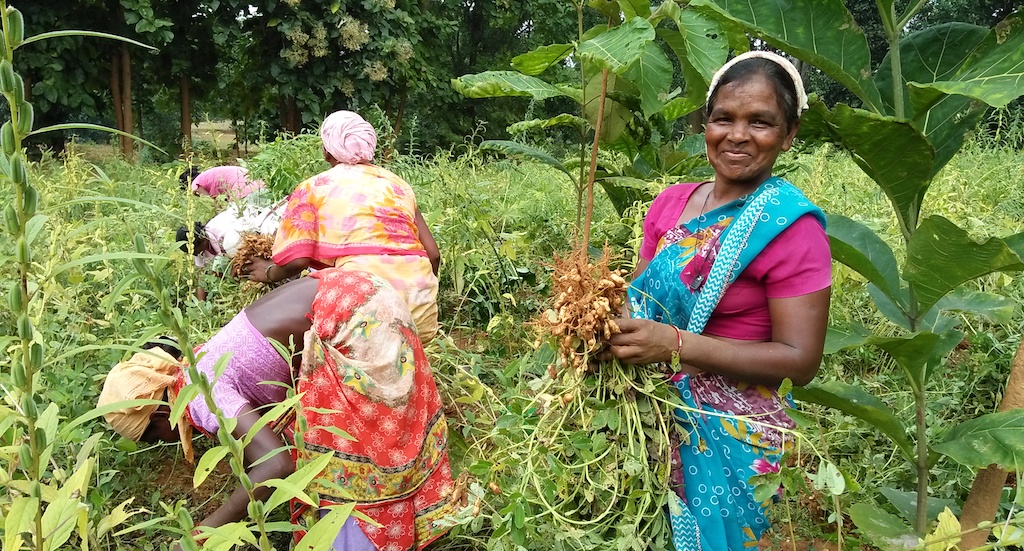 Till last year, female farmers in the tribal belt of Khunti district in Jharkhand sold tomatoes at throw-away prices. This year, they have reasons to smile.

These farmers are earning at least 75 per cent more for tomatoes, thanks to better farm practices and sale of their produce through farmer producer body.

Various training programmes on how to control pest and disease attack on tomato crop during the rainy season have worked wonders for them.

Like the proof of the pudding is in eating, these farmers are now selling tomatoes for up to Rs 35 per kilogram as against Rs 15-20 per kg last year. Extension services provided by Tata Trusts and its corporate social responsibility (CSR) partners, including like E&Y Foundation, have helped in increasing overall production.

The setting up of Murhunari Shakti Farmers Producers” Company (MSFPC) in March 2018 in the Murhu block, with a population of 5,000 people, has helped immensely in better marketing of tomatoes and in turn fetching higher prices.

“Earlier, women growers here used to sell their produce at throw-away prices in a local market, but now they are selling their tomatoes to the farmer producers” organisation MSFPC, which in turn sells in bulk to traders,” Dayamani Nag, Chairperson of MSFPC, said.

In this Kharif season so far, the MSFPC has procured over 104 tonnes of tomatoes from member farmers and aims to purchase about 1,000 tonnes by the end of December. After purchasing from farmers, the farmer producer organisation has already sold about Rs 10 lakh worth tomatoes to traders, she added.

“Earlier, women farmers used to sell tomatoes in the range of Rs 15-20 per kg. Now, they are getting better rates as we are sorting and grading the produce and dealing in bulk quantity,” Muktanag, a board member of MSFPC, said.

Now, traders come to the farmer producer organisation and negotiate the price and this change has empowered women a lot, she added.

The transformation in the lives of tribal women growers of Murhu block was made possible mainly on account of the ”Lakhpati Kisan” initiative of the Tata Trusts, implemented by a nodal agency Collectives for Integrated Livelihood Initiatives (CInI).

“The major challenge before tribal growers of Murhu was pest and disease attack on tomato crop during the rainy season. We trained them about best farm practices and raising nursery. As a result, they are able to harvest good crop,” he said.

As many as 2,100 farmers have been trained in the Murhu block who have sown tomatoes in total 440 acres during the kharif season this year.

Sharing her experience, Teresa Nag, a farmer from Saparum village, said, “I have sown 3,000 samplings of tomatoes. So far, I have sold tomatoes worth Rs 13,000. I am associated with the farmer producer organisation and I hope to get better returns”.

Nag is also board member of the MSFPC.

Tata Trusts-CInI has replicated the model from Murhu block of Khunti district to four districts in Jharkhand and are scaling up similar approach in another three states.

“Our learning from Jharkhand is that encouraging entrepreneurship opportunities for critical service delivery especially for women, in agriculture and allied livelihood areas and training them can be instrumental in increasing rural incomes on a sustainable and scalable manner,” Sridhar Iyer, EY Foundation National Director (CSR), told PTI.

The EY Foundation is one of the agencies working with the Tata Trusts-CInI on the ambitious ”Lakhpati kisan 2020 programe” being implemented at present in seven blocks in five districts of Jharkhand (Khunti, Hazaribagh, Singhbhum, Deoghar and Dhanbad).

According to Tata Trusts-CInI, the EY Foundation has contributed Rs 2.66 crore for the ”Lakpati Kisan programme”, out of which Rs 89 lakh has been spend in Murhu block alone for creating water structures, polyhouses, capacity building and to bear the promotion cost of farmer producers” organisation.

CInI Executive Director Ganesh Neelam said the partnership between EY Foundation and CInI focuses on meeting the aspirations of the small and marginal farmers in Jharkhand.

While the core focus is making tribal farmers ”Lakhpati” in an irreversible and sustainable manner, the institutional structure of community will be driving their growth in long term, he said.

“Agriculture is the prime livelihood activity for the families and the emphasis is towards promoting high value agriculture especially crops such as tomato with scientific cultivation practices to provide good yields and maximum returns. These integration of livelihoods with stress on vegetables will meet the goal of Lakhpati families with better quality of life,” Neelam said.

He further said that livelihood layering through agriculture, animal husbandry, non-timber forest produce for the families is helping farmers achieve their aspirations.

Before harvesting tomatoes, tribal women growers of Murhu block sold their watermelon at a much higher rate of Rs 6-9 per kg to companies like Reliance Fresh and Big Basket.

“This is just the beginning and there is a lot to do as the company aims a turner of Rs 5 crore in the 2019-20 fiscal,” MSFPC Treasurer Almatiru said.

She said procuring crop from member farmers is a challenging task and sought assistance for buying a small lorry or cart which will help a lot in procurement process.