Ranchi Municipal Corporation (RMC) on Thursday demarcated a four-metre wide area along the 400-metre stretch between Albert Ekka Chowk and Sarjana Chowk on Main Road for pedestrians on a trial basis to determine the benefit of a permanent footpath there.

Around 4 in the evening, The Telegraph witnessed pedestrians walking on the stretch demarcated by sliding road barriers without any hassle though some two-wheelers were parked there.

“Unlike other days, I did not have to negotiate moving vehicles on the stretch,” said Deepa Pradhan, a resident of Doranda, while entering in the Shastri Market.

“It will be good if it continues like this,” Kumar said.

E-rickshaw operators were, however, not happy with the system.

“I will have problem parking my e-rickshaw at Albert Ekka Chowk as the width of the main road has been reduced to six metres from 10 metres,” e-rickshaw driver Samsher Ahmed said.

Deputy mayor Sanjeev Vijayvargiya said very soon the stretch would be converted into a permanent footpath for the benefit of pedestrians.

“If it doesn’t rain tonight (Thursday), the stretch will be painted with colours to ensure that people recognise it a pedestrian path from far. Later, a four-metre wide footpath will be constructed at that place, which will be beautified with plants,” Vijayvargiya said.

Municipal commissioner Manoj Kumar said the entire exercise was aimed at ensurring hassle-free movement on Main Road. “We have declared the stretch between Kutchery to Sarjana Chowk as no-vending zone from July 1 and want to ensure that there is no unauthorised parking in the stretch. During the trial period, traffic personnel will help people understand the new system,” Kumar said. 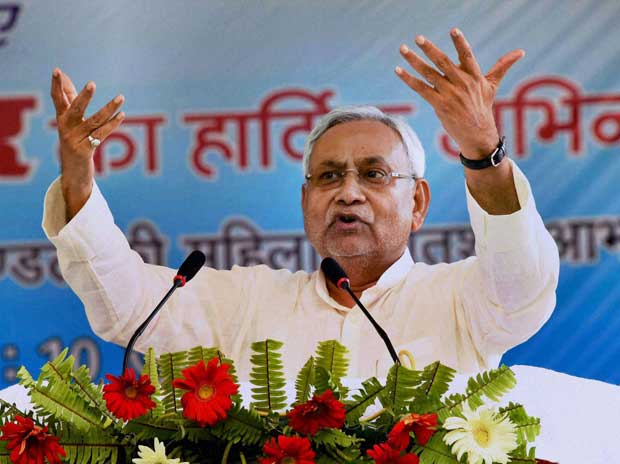 The National Executive Meeting of the Janata Dal United (JDU) will be held on June 9 under the chairmanship of party chief and Bihar Chief Minister Nitish Kumar. Nitish Kumar is likely to announce JD(U)’s road map to expand base in other states at the meeting.

JD(U) National Secretary Ravinder Singh said that the membership of a party lasts for three years. The members were inducted on June 5, 2016, and now on June 9, a meeting will be held to induct the members for the next three years.

The state president of JD(U) in Bihar Vashishtha Narayan Singh has directed every MLA, MP, MLC, office bearers and national, state and village level officials of the party to initiate the process of induction into the party by June 8.

The meeting comes amid rumours flying high about the rift with National Democratic Alliance (NDA) of which JD(U) is an ally. However, JD(U) on Friday asserted that NDA in the state was “intact”, dismissing speculation of a rift within the alliance in the wake of the party’s decision to “stay out” of the Narendra Modi government.

Earlier, Nitish Kumar had declined to be part of the BJP-led NDA government at the Centre in protest against the “symbolic representation” of one ministerial berth offered to it but refuted suggestions of any difference with its ally.

In the recent general elections, the NDA, comprising BJP, JD(U) and LJP, won 39 out of 40 Lok Sabha seats in Bihar, the best performance by any political formation in the last few decades. Nitish Kumar’s party bagged 16 seats.

The meeting also comes in the backdrop of series of comments from JD(U)’s opponents in Bihar.

Recently, RJD leader and former Bihar Chief Minister Rabri Devi said she would have no problem if Nitish Kumar joins grand alliance of the Opposition. Another Lalu Yadav loyalist, RJD’s Raghuvansh Prasad Singh has waived the white flag in front of the JDU leader.

Since the Lok Sabha poll results, the Bihar leader of opposition has not tweeted against Nitish Kumar and has restricted himself to greetings and congratulatory messages.

Meanwhile, KC Tyagi, Secretary General of JD(U), told India Today TV that JD(U) would contest the Bihar Assembly elections in 2020 with NDA. “NDA is intact in Bihar and we will fight the 2020 elections together,” KC Tyagi said.

JD(U) not only increased it vote share but also dealt a major blow to its opponents in Bihar including RLSP’s Upendra Kushwaha and HUM’s Jeetan Ram Manjhi. Both — Rashtriya Lok Samta Party (RLSP) and Hindustani Awam Morcha (HUM) — fared miserably in the 2019 Lok Sabha polls. The NDA ally in Bihar increased its vote share from 17% in 2014 to 21% this time. India Today-Axis MyIndia post poll survey suggested that 27% Yadavs, 13% Muslim’s voted for NDA in Bihar.