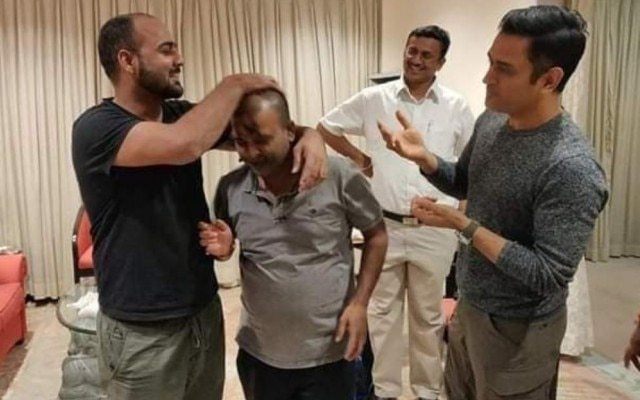 While the rest of Indian cricket may feel anxious and curious about his future, former India captain MS Dhoni seems to be least concerned. The 38-year-old wicketkeeper-batsman who last played for India in the ICC World Cup in England hasn’t yet called it quits from international cricket and that has kept everybody, from the administrators to the supporters, guessing. And recently, the ‘cool’ cricketer was seen chilling out with his biker friends on the streets of Ranchi.

On Saturday, Dhoni joined the birthday celebrations of his childhood friend Seemant Lohani at his farmhouse at Kailashpati on the outskirts of Ranchi. His friends gathered on the occasion and the ace cricketer was seen busy smearing cake on his friend’s face. Dhoni recently was present at the JSCA Stadium in Ranchi where he met his India teammates as they took on South Africa in a Test match. Earlier this year, too, Dhoni had invited the Indian cricketers at his farmhouse after they visited his hometown to play against Australia in an ODI.

Dhoni has kept himself away from the national assignments ever since India crashed out of the World Cup in July. He went for military training during India’s tour of the West Indies and also gave the subsequent series against South Africa and Bangladesh a miss. He may be seen featuring in India’s home series against the West Indies next month and particularly the poor form of Rishabh Pant has encouraged his fans. They are even hopeful that Dhoni will end up playing in the T20 World Cup in Australia next year.

Former captain Sourav Ganguly, who took over as the president of the BCCI last month, clarified that he was going to have a discussion with Dhoni over his retirement issue. Ganguly also conceded that the right to retire is Dhoni’s personal one.

With over 10,000 runs in the 50-over format, Dhoni has won India the world titles in both the 20 and 50-over formats since 2007. He has also won India the Champions Trophy besides a multilateral ODI tournament and bilateral T20I series in Australia.