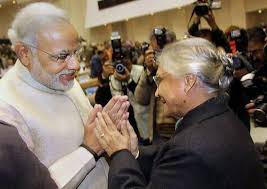 The political legacy of veteran Congress leader Sheila Dikshit, who was India’s longest serving woman Chief Minister, was best summed up by her one-time rival and now Union Minister for Science and Technology, Harsh Vardhan. “We had our differences on policies, but we always admired her behaviour and efficiency,” he said as Delhi plunged into mourning following her death on Saturday evening.

“For 15 years, I had the opportunity to work with her in the Assembly as an MLA. But we always admired her behaviour and efficiency at work,” he said.

It was this efficiency that made Ms. Dikshit the face of a fast-changing Delhi, someone who knew how to change political adversity into opportunity.

The city’s change to cleaner public transport bears testimony to Ms. Dikshit’s efforts. In April 2001, public transport in the national capital collapsed as nearly 10,000 old and polluting diesel buses were ordered off the roads by the Supreme Court. The Congress government led by her was not ready with a plan to deploy cleaner CNG buses.

“For nearly two decades, Sheilaji personified Delhi and the aspirations of its citizens. She served them with her heart and mind and they gave her their abundant love. Every resident of Delhi will feel that he or she has today lost a member of his or her family,” former Union Minister P. Chidambaram said.

Her largely successful legacy in Delhi was, however, marred by allegations of corruption during the 2010 Common Wealth Games.

She also briefly served as the Governor of Kerala from March to August in 2014.

Ms. Dikshit was born in Kapurthala in Punjab to a non-political family in 1938, and graduated from Miranda House, University of Delhi. In July 1962, she married bureaucrat Vinod Dikshit, who she had met during her college days.

And her first foray into politics came when she assisted her father-in-law Uma Shankar Dikshit, a loyalist of Jawaharlal Nehru who had served as a Minister in the Indira Gandhi Cabinet in 1971 and become the Governor of Karnataka and West Bengal.

Ms. Dikshit took the formal plunge in 1984 when she became a Lok Sabha member from Kannauj in Uttar Pradesh. Known to be a loyalist of the the Gandhi family, she was hand-picked by Rajiv Gandhi in his Council of Ministers after he became the Prime Minister in 1984.

“We worked closely together during the years she was Chief Minister of Delhi, Delhi Pradesh Congress Committee chief and secretary of the Indira Gandhi Memorial Trust,” Congress leader Sonia Gandhi said in a letter to Ms. Dikshit’s son, Sandeep Dikshit.

Ahead of the 2017 Assembly election, the Congress projected her as the chief ministerial candidate, but she was dropped after it tied up with the Samajwadi Party. She was made the Delhi Congress chief ahead of the Lok Sabha election and was defeated in the North East Delhi constituency.