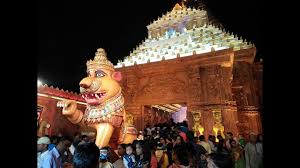 This festival season puja pandal revellers of the city will get a glimpse of ‘Gods own country’ right here in Ranchi. Known for showcasing the heritage of various Indian states like Rajasthamn, Odisha and Jharkhand in the past few years, this year at the Ranchi Railway Station puja pandal, Ranchiites will get to witness the vibrant art and culture of Kerala.

From creating a facsimile of the famous Sabarimala temple to portraying the renowned dance forms Kathakali and Mohiniyattam to the traditional boat race Vallam Kali conducted during Onam, this puja pandal will have it all.

At the main entrance of the pandal, the visitors will be greeted by statues inspired from the south and also 1000 diyas will be lit up. To give a view of the boat race a 60 feet boat is also being made from bamboo and hay with figures performing Kathakali and Mohiniyattam on it.

In the passage leading to the main idol 100 hands will be seen in the various mudras of the Bharatnatyam. The walls of the pandal will be decorated using about 700 ‘dafli’ with dancers painted in the centre performing the Mohiniyattam.

The idol of Goddess Durga which will be about 15 feet tall will be seen in the form of a Kathakali dancer. The other deities will also be in various dance postures. All the idols are being made of clay while the costumes and ornaments are being made to order from the south. “Every year the organising committee tries to portray the diverse culture of India.

Representing different states, this year the theme for the pandal is inspired from the state of Kerala. For people who are unable to travel, it is our attempt to introduce them to the various traditions and cultures of our country. It is also an effort to create awareness about old and dying dance forms,” said Munchun Rai, President Ranchi Railway Station Durga Puja Committee.

Bamboo, coconut rope and hay are primarily being used for the pandal structure and minimum use of theramcool is being ensured. The entire structure of the pandal will be about 30 feet high and 50 feet broad. The whole event is being primed at a whopping cost of Rs 30 lakh. The pandal will be open to take visitors from October 3.

The organisers are also giving special emphasis to conserve the environment. Food stall owners around the pandal premises are being asked to ensure cleanliness and dry and wet dustbins will also be placed at frequent intervals. The committee has asked RMC to collect garbage twice a day.

To maximize security about 10 CCTV cameras will also be installed. Separate lines using barricades for male and female pandal hoppers will be made.

For the first time, the organising committee is conducting the event not on the main road leading to the Ranchi Railway Station but instead the puja pandal is being set up in a colony situated right behind the station.