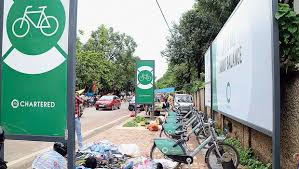 This Independence Day residents of the capital are being urged to be a part of “Cyclothon”, a rally to promote the use of the cycle given its credentials as a pollution-free, noise-free and environment friendly mode of commute.

“This is a promotional effort to increase awareness on the app-based public bicycle sharing system that has been introduced in the capital as a part of the Ranchi Smart City project. Cyclists will use promotional banners painted in the colours of the Indian flag, sporting slogans in Hindi to encourage people to opt for cycling,” said state urban development department spokesperson Amit Kumar.

According to a 2014 survey by the Institute of Transportation and Development Policy (ITDP), use of shared autos (diesel and battery operated) in Ranchi was at 28 per cent, while operation of buses constitutes a meagre 5 per cent of the share of public transport.

On an average, 800 people are using the app-based public bicycle sharing platform a day, said Shashi Ranjan, manager of Chartered Bike, the Ahmedabad-based firm that launched the initiative in Ranchi.

“Earlier, 1,500 people would use the bicycles a day. But due to the monsoon, usage has slipped to 800 per day. However, with more awareness people’s interest will increase,” he said, explaining the rational behind an event like Cyclothon.

Ranjan said they were organising such an event for the first time. “So far, we have got confirmation from 15 cyclists. They will be provided with T-shirts and the banners. Since it is a promotional event, the rides will be free,” he said.

The Cyclothon, of 6km, will commence at 7am from Albert Ekka Square (on Main Road) and traverse through major intersections like Lalpur, Dangratoli, St Xavier’s College square, Iqra Masjid and culminate at Big Bazaar (opposite Ranchi Club).

The first phase of the app-based initiative was launched in March with 600 German-made cycles. As many as 60 docking stations were set up along two routes, namely, Kanke Road-Chandni Chowk-Suchana Bhawan-Main Road and Kokar-Lalpur-Circular Road-Kutchery Chowk-Morabadi.

Chartered Bike is ready to launch the second phase with 600 more bicycles and is currently carrying out a survey to set up more docking stations.

“The second phase will have cycles on routes between Karamtoli Chowk to Kokar via Booty More, Ratu Road to Project Bhawan via Shahjanand Chowk, Argora Chowk and Birsa Chowk, Birsa Chowk to Main Road and Shahjanand Chowk to Main Road via Kadru. We are ready with the bicycles and will soon start construction of docking stations after completing the survey,” said a company official.

Ranjan referred to the initial hiccups they faced when people began parked their motorbikes at docking stations, thereby defeating the very purpose of the cycle-sharing initiative.

The Chartered Bike app is available on both Android and iOS platforms. There is a subscription fee, Rs 35.40 a day, Rs 236 a month and Rs 1,180 a year. There is a nominal user charge of Rs 5, but the first 30 minutes are free.

Those who do not have access to smartphones can buy tickets and use the cycles.