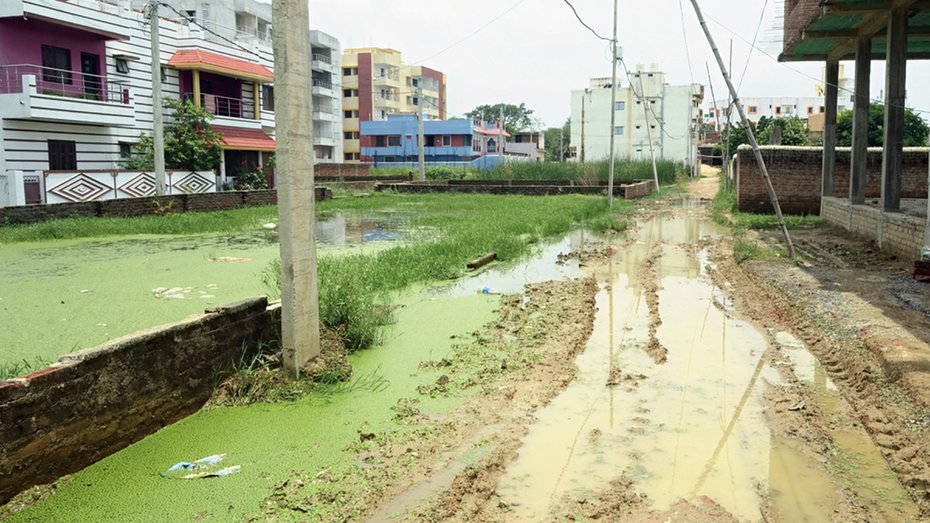 Over 1,000 residents of Jagatpuram, a new settlement on a flank of Kanke Road (Ranchi-Patratu Road) less than 5km from the chief minister’s residence, are forced to live without concrete roads and drainage.

A seven-minute drive from the CM’s residence, Jagatpuram mocks the tall claims of the central and state governments of working towards making Ranchi a Smart City.

The locality, which grew virtually from farmland in the past four years owing to the capital’s rapid urbanisation, now has around 200 households. Some of these are opulently built.

But, the first heavy hours have bared the non-existent civic facilities in the area that falls under Ward 1 of Ranchi Municipal Corporation.

The locality has only one cemented road, 200 feet of it, in a part of the colony built with Ranchi Zilla Parishad funds. The mud roads turn slushy streams. The low-lying area is virtually marooned.

Ramanand Raman, who lives here and works at a private pathological laboratory, said he was already regretting having bought land here for his house. “I purchased land here six months ago, I’m already repenting my decision. It rains, and everyone is trapped at home, children can’t go to school, there’s no road to walk on,” Raman said.

Another resident Pramod Kumar said it was a relatively new settlement, not more than four years old.

“Many influential persons bought land here, you can see their palatial buildings. In another season, it may even look like a posh locality. But on the ground, and in monsoon specially, things are a mess because we don’t have proper roads and drainage. These are basics,” he said.

He added that as the bulk of the area was flooded or slushy, sanitation workers had stopped coming. “Imagine, we have to dump garbage here and there. Perfect conditions for mosquitoes to breed,” he added.

Contacted, Ranchi deputy mayor Sanjeev Vijayvargiya admitted to the problem at Jagatpuram. “RMC is aware of the road and drainage problems there and has prepared a detailed project report worth Rs 5 crore to address them. Work will be done in phases. In the first phase, a Rs 1.5 crore road will be built, for which the tender will be floated very soon,” he said.