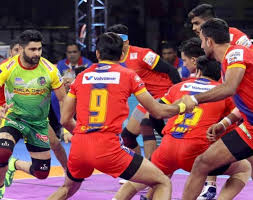 Patna Pirates, who had lost their last six straight matches, finally got a taste of victory and in some fashion. Tamil Thalaivas wanted to end their eight-match winless streak but instead, suffered a massive loss. Patna increased their head-to-head record against Tamil to 5-2.

After a 16-point loss against Dabang Delhi KC on Sunday, Tamil Thalaivas will want to improve on their performance and move to Pune with a positive result under their belt. They will draw some positives from Sunday’s match as ‘Showman’ Rahul Chaudhari managed a Super 10 in that contest and V Ajith Kumar also scored nine raid points. Ajith, in particular, has been in stupendous form and Tamil Thalaivas will want him to continue in the same vein as they head into the remainder of their games potentially needing to win them all.

The form of ‘Iceman’ Ajay Thakur will worry the team, though, as he failed to open his account against Dabang Delhi KC, which put the raiders under early pressure. The defence was also a big worry for Tamil Thalaivas in their previous match with just Mohit Chhillar and Sagar managing to score any tackle points for the team. Seniors Manjeet Chhillar and Ran Singh will have to tighten things up in defence, if they want to thwart ‘Record-Breaker’ Pardeep Narwal’s charge.

Patna Pirates go into the match with a six-match losing streak in spite of some stunning performances by their talisman ‘Record-Breaker’ Pardeep. The star raider is currently third among the top raiders in Season 7 and has managed 14 raid points in each of the team’s previous two matches. Against UP Yoddha, he accounted for little less than half the team’s total points scored, which highlights how much the team depends on him. However, Pardeep can’t do it all himself and needs the likes of Mohammad Maghsoudlou, Monu and Vikas Jaglan to step up.

The defence missed the services of their leading tackle points scorer this season – Jaideep – in the starting seven in their previous encounter and consequently managed only eight tackle, while conceding 20 raid points. Though many of their players have all-round abilities, the team will want a senior player like Jawahar or Hadi Oshtorak to lead the defence and back up Pardeep’s efforts in offence.