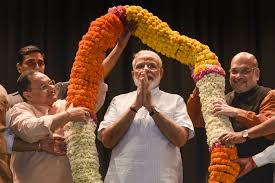 According to The Pioneer, Diyadih village is one out of 116 odd villages where around 20,000 people were left homeless due to construction of Chandil Dam of Subarnarekha multipurpose project.

The homeless people displaced from their original habitant were bereft of their houses and agriculture land. However, a few months ago, 40 families of Diyadih village were provided houses under PM Awas Yojana by the Seraikela-Kharsawan district.

Under PM Awas Yojna, each unit of house has two rooms, verandah, kitchen and a toilet.

“Diyadih village is one of displaced village of Subarnarekha multipurpose project. As the government has constructed 40 units of Pradhan Mantri Awas Yojana (PMAY) scheme, the villagers impressed with the project and expressing their gratitude towards Modijee have renamed the village as Modi Tola,” Vimal Mahto, one of the beneficiaries of PMAY was quoted saying by The Pioneer.

A farmer by profession, Mahto further said they were displaced from their houses around four decades back, many governments visited them but they cared little about their interest. “Few months back that we receive houses PM Awas and the onus goes to PM,” Mahto said.

However, residents of Diyadih village are deprived of infrastructure facilities in the village as they are yet to see power connection at the time when the Jharkhand government is claiming of 100 percent power connection in rural areas.

“Work on connecting the village with power map is going on war footing pace with the village going to witness power connection within a month. I have also ensured villagers that a rural road will be constructed in their village,” The Pioneer quoted the BJP MLA saying.

Though the villagers have received houses under PM Awas Scheme, the displaced families are yet to get the promised compensation.

The State Government had approved proposal for construction of 1.60 lakh houses under the Prime Minister Awas Yojana, of which 48,000 houses has been completed. At the same time construction work of 43,822 is underway at war footing pace.

The PM Awas Yojana was introduced in June 2015 is an interest subsidy scheme for purchase/construction/extension/improvement of house to cater economically poor section of society.