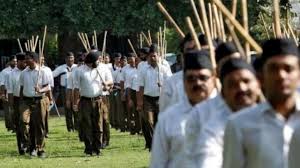 Aletter purportedly issued by the special branch of Bihar police with directions for collecting details about functionaries of the RSS and its affiliates has raised hackles of state BJP leaders and brought to fore the uneasiness in ties with ally JD(U).

Home department officials were tight-lipped about the veracity of the purported communication dated May 28 wherein a report on name, address, telephone number and occupation of district-level office bearers of 19 Sangh Parivar outfits had been sought by the special branch.

The recipients of the letter had been asked to submit their reports within a week.

State BJP leaders expressed surprise over the police move with BJP MLC Sachchidanand Rai saying the party must be careful of the intentions of Chief Minister Nitish Kumar, who holds the home portfolio in the NDA government in Bihar.

BJP MLA and state vice-president Mithilesh Tiwari expressed surprise that police were involved in surveillance of activists of Sangh Parivar, “who are known to be selflessly devoted to nation building”.

Tiwari, however, asserted the development will not have any bearing on BJP-JD(U) ties.

BJP MLC and party’s media cell national co-in charge Sanjay Mayukh said it would be better if the officials responsible for issuing such a communication come clean on the matter.

“I am astonished that the government is seeking such information. The government should have had the information by now since Sangh activists are not known to be secretive. They function in a transparent manner,” he remarked sarcastically.

Rai pointed to the timing of the letter. It was around the same time when Nitish Kumar refused to join Narendra Modi government at the Centre despite contesting the Lok Sabha polls as an NDA ally.

Kumar’s JD(U) was expected to have representation in the Union Cabinet. However, the Chief Minister who also heads the party decided otherwise stating that JD(U) was being offered a symbolic representation not commensurate with its strength in Parliament.

The chief minister has also remarked wryly on a couple of occasions thereafter that the BJP is actually not in need of allies for running its government at the centre and a mere symbolic representation is of no significance.

Notably, the BJP has 303 MPs in Lok Sabha, far in excess of 272 needed for a majority. In Bihar, it contested 17 seats and won all of these while the JD(U) which fought as many bagged 16.

“If information is being gathered as part of some routine procedure then I have no problems. But if it was being done with any ulterior motive, then I have strong objections.

“I am unable to understand why the police should keep a surveillance on activists of the Sangh Parivar, who are known to be selflessly devoted to nation building,” Tiwari said.

He, however, noted that the parties have come together to develop Bihar and will continue to work in this direction.

Both parties have a mutual understanding that each would pursue its own ideology in a way that does not harm the other, he said.

The letter also seeks information on right-wing Hindu Mahasabha though it is not an affiliate of the Rashtriya Swayamsevak Sangh (RSS).

Opposition RJD leaders latched onto the issue to take a swipe at the BJP and the JD(U).

Kumar had snapped 17-year-old ties with the BJP in 2013 but returned to the NDA in 2017 after a short-lived alliance with arch-rival Lalu Prasad’s RJD and Congress.