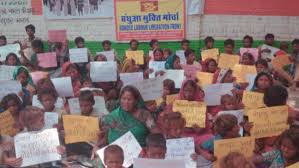 Over 100 bonded workers were rescued from brick kilns of Bihar and Haryana in the last week of June, who congregated at Jantar Mantar in Delhi on July 1 to share stories of severe forms of physical violence, abuse and humiliation that they had to go through to make ends meet. The labourers were rescued from a carefully construed web of human trafficking spanning across Banka and Nalanda in Bihar among other districts. Kamla rescued from Diwana gaon in the Kurukshetra region said, “We were sold off to the brick kiln owner by two human traffickers. The boys who had sold us off made a hefty commission out of the deal. On the other hand, after slogging in the kiln for hours at a stretch we were given only about Rs. 1,000-1,500 per month to make ends meet.”

Over 21 families have been rescued from the region, which include around 80 workers being women and children. The workers from Bihar explained that employment in the unorganised sector in the state primarily remains seasonal as they are able to find work only for approximately three months. Poonam Devi from Jagta village said, “Through agriculture we could not sustain our family. Per month, my husband was able to make Rs 200 while I as a woman could only manage to get Rs. 100.”

The rescued workers stated that they were lured in the trade because of the advance payments being offered to them at the beginning of the season. Some families were offered Rs. 10,000, while some were given Rs. 15,000. The workers had taken the loans to repay old debts, while some in the case of medical emergencies. The rescued workers said that they had taken their entire families to the kiln to ensure that the payments come through, however, even after ten months of working for over fourteen hours per day, the workers were told that their debt could not be cleared. After the rescue, it was discovered that the signatures of the workers had been taken forcefully.

Laxmi, who was rescued from Bihar said, “I had no other option but to work at the kiln as the employment generated under MGNREGA (Mahatma Gandhi National Rural Employment Guarantee Act) would get me a meagre amount of Rs. 100 per day. Children as young as 14 are being forced to drop out of education and made to work in the kilns. I was made to believe that the life at the kiln would be a lot better.”

Another worker, Sanjay who was also lured through a network of traffickers, he said, “I was working as a construction worker for ten hours a day and I could manage to make only Rs. 250 per day. I was told I would just need to be in another state for six months and make 1,000 bricks and I would be paid close to Rs. 700 per day. But in reality, the trafficker managed to take his cut and I was not paid as promised. My children had to leave school and work with me at the kiln to survive.”

The lack of education among the workers gives a leeway to contractors to trick the labourers into signing contracts which are designed for their own profit. As a result, many workers get trapped in the kilns as they can’t even run away since their families are also in the kiln.

The workers were rescued on the basis of an input from the region. Post the rescue, Nirmal Gorana of the National Campaign Committee for the Eradication of Bonded Labour, has filed written complaints with the Deputy Magistrate of Kurukshetra. The team of rescuers from the Human Rights Law Network also reached out to the DM’s office of the Pehwa region on June 28. Post the rescue, the local administration left the workers at the railway station without taking any responsibility for their rehabilitation.

Nirmal Gorana said, “The Modi government has brought in an amendment to the Human Trafficking Bill, however, the provision of the rehabilitation for the bonded labourers has been reduced to a joke. How is rehabilitation even possible without the release certificates from the government?” He added that the dalit and adivasi communities are bearing the brunt of the multiple intersections of systemic oppression placing them in the condition of poverty, regular harassment and denial of their right to life and dignity. He said, “These labourers are being deprived of their basic rights, and even in 2019, modern slavery exists. We demand that the government form a policy protecting the rights of these labourers. Also, the government should immediately issue release certificates to all these rescued labourers along with interim relief fund of Rs 20,000 per labourer. The government should provide rehabilitation to these workers and ensure that the manual issued by the ministry of labour is implemented.”