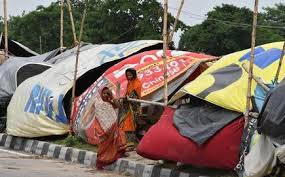 Barring a light drizzle, northern Bihar has not seen much rain over the past week. But the aftermath of the unprecedented downpur in the region a fortnight ago is very visible, especially along the four-lane highway from Muzzafarpur district towards Darbhanga. Black polythene sheets flutter in the air and relief camps continue as far as the eye can see.

Up to 137 people have died and close to 90 lakh people in the 18 districts of Northern Bihar continue to be affected by the flash floods that struck after unprecedented rains lashed the region on July 13.

Thirty-year-old Rekhadevi, clutching her child Ajit, stares at her submerged hut a few metres away. Three weeks earlier, Ajit had nearly drowned as Rekha and her husband Muncchan Ram battled to save their lives and escape onto the highway. “In two hours flat, we had water up till our noses. My boy was drowning, when I suddenly noticed him and pulled him out to safety,” said Ram.

Up to 1,300 houses in Mithansarai and Madhopur villages have been completely drowned, and though the water is receding slowly by the day, only the rooftops of the grass huts are visible. Madhopur village has turned into an island of sorts.

Muncchan Ram, his neighbour Rajinder Ram and thousands like them, who are landless labourers residing in low lying areas, are still waiting for ₹6,000, the compensation announced by the State government for each flood-affected family.

While 50-100 children are attending a makeshift school manned by 12 teachers on the highway, over 600 children have not been able to attend classes since last month, as their school lies submerged.

The district administration is running a boat service to ferry villagers to the mainland. For Sunitadevi (24), who lost her four-year-old girl Preeti to Acute Encephalitis Syndrome on June 20, the floods are another blow, just a month later. “Sunita has just gone quiet now,” says her husband Ashok. Sunita’s 30-year-old neighbour Angoori Khatun says that cases of diarrhoea in the village are now on the rise. Lack of clean drinking water during the floods has worsened the situation.

Vir Singh Jadhav, a 69-year-old farmer, was seen wading through waist-deep waters to cut fodder for his starving buffaloes. Jadhav lost all the paddy he had sown for his Kharif crop on three acres to the floods. “I have incurred a loss of close to ₹40,000, which I earn by selling rice each year. Farmers are running into losses with mounting debt and little help from the government,” he said.

Nearly 70 per cent of Northern Bihar is under water. “Up to 2,860 hectares of paddy has been washed out and 33 per cent of all standing crops have been lost. We will give farmers compensation per hectare,” said Darbhanga’s district collector Thiyagrajan SM. Thiyagrajan and his team are wondering if climate change has led to the unprecedented situation, with heavy rains in July causing flash floods a month earlier than usual.

Muzzafarpur’s Additional District Magistrate Atul Kumar Verma, who is in charge of Disaster Management, concurs. “We were expecting rainfall of 304.8 mm and in July it has rained 541.38 mm, which has created an unforeseen situation,” he says.

“Rivers have been at their highest levels since 1987. The levels of Kamla Balan, Bagmati and Aghwara have been redefined. At four places, the Kamla Balan has broken embankments and risen to 53.80 metres, above the danger mark. About 80 per cent of Darbhanga is submerged. About 211 panchayats in 17 blocks are affected,” says Thiyagrajan.

The failure of the district administration in building a left embankment to the Bagmati river has compounded the trouble. “Work on the Bagmati left embankment has been stalled since 1975 due to problems of land acquisition. While the right embankment broke, the left one has never been built on a stretch of 15-20 km, leading to the flooding of Darbhanga,” said a senior official at the collectorate office.

In Darbhanga, the district administration claims that ₹6,000 has reached the bank accounts of 2.2 lakh flood affected. Yet, in Mustafapur, people in an entire village are wondering when will they receive their compensation. “Building makeshift tents itself costs over ₹5,000. We have had to buy our own polythene and bamboo. How will a compensation of ₹6,000 suffice,” asks Satyadevi. Villagers of Kako panchayat in Jhanjjharpur block of Darbhanga district protested in the block development office demanding that their names be included in the compensation list. They stormed into a block office and beat up a block development officer (BDO), Vinod Kumar. The villagers had to be kept at the bay and Kumar had to be kept locked in his office for a few hours to ensure his safety.

The school and health sub-centre in the village remain submerged. The district administration, which has all of 15 government-owned boats, is struggling to outsource boats and has none in Mustafapur.