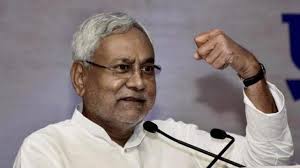 Bihar Chief Minister Nitish Kumar on Thursday asserted that there would be no compromise on “crime, corruption and communalism” under his rule, which has been characterized by “nyay ke saath vikas” (development with justice) and “sampradayik sauhardra” (communal harmony).

In his hour-long address at Gandhi Maidan here on the occasion of Independence Day, Kumar said a new system of policing was being introduced in the state for effective maintenance of law and order.

“We are never going to compromise on crime, corruption and communalism. ‘Nyay ke saath vikas and sampradayik sauhardra’ have been and will always remain our priority.

“From today, we have introduced a new system of policing wherein maintenance of law and order and investigation shall stand separated so that personnel engaged in either are not distracted by other demands of duty,” Kumar said after unfurling the tricolour.

The chief minister also inspected the tableaux depicting the various schemes launched and the measures taken during his 14-year-long rule in the state.

“Our crackdown on corruption will continue. Bribery, amassing of wealth disproportionate to assets and through misuse of public office will be severely dealt with. None of those who are involved in earning money through illegal and immoral means will be spared,” the chief minister said.

Kumar pointed out that a Public Service Grievances Redressal Act is in place which guarantees resolution of complaints in a transparent manner and a mechanism has been devised for deciding service-related issues of government servants in a time-bound manner.

“People must be made aware that ill-gotten wealth may bring momentary pleasure, but its long-term impact is perilous. We must always keep in mind the words of Mahatma Gandhi that we must consume only as much as we need, giving up greed in any form,” he maintained.

Recalling that he had ordered a complete ban on sale and consumption of alcohol three years ago, in line with the demand of women in the state, Kumar said it had evoked enthusiasm, with people forming a massive human chain on the theme of prohibition, though “many who think it is their right to drink, seem to be unhappy over this move.”

People must realize that consumption of alcohol cannot be a matter of rights, he asserted.

“I would also like to draw the attention of youth towards a report of World Health Organization which has done a study on the ill effects of consuming liquor,” he added.

The CM also spoke at length about the measures taken by his government to improve education scenario in the state, including the proposed launch of “Unnayan Bihar” programme next month which aims to emulate across the state a successful e-learning experiment carried out in Banka district.

He said that his government was committed to providing people with better health care facilities and that the expansion and upgrading of premier hospitals at Patna, Muzaffarpur and Gaya have been approved.

Kumar mentioned that his government was taking steps to boost agriculture, including the setting up of a separate power feeder for farmers.

He lamented that the effects of climate change are being felt in Bihar, where there has been a decline in average rainfall over the years, while untimely showers have caused flash floods.

“We are doing our bit to reverse the damage. Our Jal-Jeevan-Hariyali drive, launched recently, is a step in this direction”, he added.

The CM, after attending the Independence Day ceremony, visited the Rajdhani Vatika adventure park in the city where he tied a thread around a tree in presence of cabinet colleagues, including his deputy Sushil Kumar Modi.

The state government is observing the festival of “Rakshabandhan”, which falls on this date, as “Vriksh Suraksha Diwas” (Day for protection of trees).