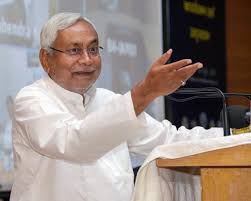 Seeking to send out a message of environment preservation, Bihar Chief Minister Nitish Kumar on Thursday arrived at the state assembly in an electric car.

As his vehicle arrived at the porch of the historic building that houses the bicameral legislature, he was presented with a bouquet by Transport Department Principal Secretary Sanjay Agarwal.

While climbing the flight of stairs that lead into the assembly premises, Kumar was heard saying, “It is a pleasure travelling in this car. It is almost soundless and its design feels very comfortable while sitting inside”.

Talking to reporters on the occasion, Agarwal said the car, which has been manufactured by Tata Motors, can cover a distance of 150 km upon being charged for four hours.

“Factoring in the cost of electricity it can be said that the car, which is priced at Rs 11 lakh, costs 80 paise per kilometer. Besides economic viability, it also causes zero pollution.

“We are in the process of installing charging points at 1, Anney Marg (the CM’s residence which is about a kilometer and a half away) and here at the Vidhan Sabha,” Agrawal added.

All such vehicles would have number plates in green to highlight their eco-friendly nature, the principal secretary said.

Replying to queries from journalists who thrust their microphones inside the car as soon as the chief minister alighted, driver Ganesh said, “It is very easy to drive. There is no need to change gears frequently.”

In the Union Budget presented by Finance Minister Nirmala Sitharaman earlier this month, an additional tax benefit of Rs 1.5 lakh was announced on payment of interest towards loans taken for purchase of electric cars.

It was seen as a measure taken by the Narendra Modi government to promote the use of eco-friendly cars.