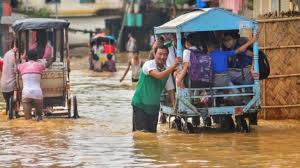 he flood situation remained grim in parts of northeast and Bihar as the death toll mounted to 44 on Monday, with nearly 70 lakh people affected, even as north India witnessed widespread rainfall.

The national capital’s long wait for monsoon rains also ended on Monday as it received 28.8 mm precipitation, the maximum in July this year, and more rains are expected over the next two to three days.

In Assam, the deluge spread to 30 of the state’s 33 districts, affecting nearly 43 lakh people and claiming 15 lives, besides submerging rhino habitats the Kaziranga National Park, Pobitora Wildlife Sanctuary and the Manas National Park.

Prime Minister Narendra Modi spoke to Chief Minister Sarbananda Sonowal over phone and discussed about the prevailing condition on Monday.

Altogether, 42.87 lakh people in 4,157 villages are reeling under the impact of the floods that have overrun 1,53,211 hectares of farm land with standing crops, the Assam State Disaster Management Authority (ASDMA) said.

The water level of the Brahmaputra rose above the danger level across the state.

The town of Bokakhat has been cut off from the rest of entire upper Assam due to the flood waters, the release said.

The death toll in the Bihar floods mounted to 24, with 25.66 lakh people reeling from the deluge in 12 districts of the state following incessant rains in neighbouring country Nepal.

Five more children drowned in two separate incidents in East Champaran district, but a senior official of the state disaster management department said they were not counted among the flood casualties.

With five rivers in spate, Chief Minister Nitish Kumar undertook his second aerial survey of the flood-hit areas during the day.

Of the 24 deaths reported till 6 pm on Monday, Sitamarhi accounted for 10 deaths, while nine were reported from Araria, four from Kishanganj and one from Sheohar, a Disaster Management Department report said.

Four deaths were reported till Sunday evening from Araria (2), Sheohar (1) and Kishanganj (1).

According to the Water Resources Department daily bulletin, five rivers– Baghmati, Kamla Balan, Lalbakeya, Adhwara and Mahananda– are flowing above danger level at various places in the state.

At least 1,000 families had to be evacuated in Lunglei district of Mizoram as raging waters of the Khawthlangtuipui river flooded 32 villages, while rain-related incidents led to the death of five people in the state, officials said.

At least 32 villages in the Tlabung area of south Mizoram’s Lunglei district were flooded by the river Khawthlangtuipui. Around 700 homes were submerged in the district and 800 families had to be shifted to safer places, the officials said.

Several towns and villages remained inaccessible due to road blockades caused by landslides, while power supply and telecommunication services were also severely disrupted across the state, the officials said.

Rising waters of the Brahmaputra and the Jinjiram rivers, both flowing from Assam, submerged the low-lying areas of the district, an official said.

Meanwhile, the low-lying areas of the state’s capital city Shillong were also flooded.

However, the flood situation in Tripura showed signs of improvement as Khowai and Haora rivers started receding, officials said.

Personnel of the NDRF and security forces rescued a number of people in the flood-affected Khowai and West Tripura districts, they said.

Around 13,000 people in West Tripura district and 2,000 in Khowai district have taken shelter in government buildings and local clubs where temporary relief camps have been opened by the administration.

In Maharashtra, 75 villages along river banks in Palghar and Thane districts have been put on alert as the water level of two major dams in the region are close to the overflow mark, a senior civic official said.

Many parts of Himachal Pradesh have received light to moderate showers since Sunday.

The weatherman has issued a yellow warning for heavy rains on Tuesday.

Widespread rains lashed most of Punjab, Haryana and Chandigarh on Monday, bringing down the maximum temperatures in the region up to five notches below the normal.

As many as 119 teams of the National Disaster Response Force (NDRF) have been deployed in flood-hit areas of the country, including Assam and Bihar, and a 24X7 control room has been set up in Delhi to closely monitor the regions, an official statement said.

The teams, each comprising around 45 personnel, are equipped with boats, divers and other flood rescue-related equipment, it said.