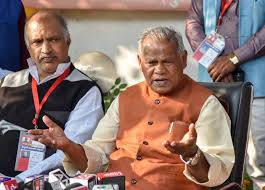 Former Bihar Chief Minister Jitan Ram Manjhi on Sunday disclosed that his Hindustani Awam Morcha (HAM), a constituent of the opposition Mahagathbandhan in the state, would be contesting the upcoming Assembly polls in Jharkhand in collaboration with an NDA partner.

“Our talks with Ajsu is in the final stages. Seat sharing arrangements will be decided soon. We hope it will be mutually beneficial and there will be a seamless transfer of votes during elections”, Manjhi told PTI in Gaya, his native district.

Asked why he would not be contesting as part of the Mahagathbandhan in the neighbouring state, Manjhi said “HAM was never a part of the Mahagathbandhan in Jharkhand. We joined the coalition comprising Congress, RJD and others only for Bihar. Beyond the boundaries of the state, the alliance does not exist. So our move should not be seen as a betrayal”.

He also declined to comment as to whether he was in talks with leaders of the BJP, the senior NDA partner in Jharkhand, and added: “our alliance with Ajsu will be taking place mainly because of the personal friendship I have with its president Sudesh Mahto”.

He also denied that the development was a signal of his plans to return to the NDA in Bihar.

Manjhi had floated his own party after walking out of JD(U) in 2015 after he was asked to step down as chief minister to make way for the return of his political mentor Nitish Kumar.

The Mahadalit leader went on to contest the Assembly polls held later that year as an NDA constituent, but his party fared poorly as only Manjhi managed to win one of the two seats he had contested.

About six months after Kumar returned to the NDA in July 2017, Manjhi changed track and joined the Mahagathbandhan, which then comprised only the Congress and the RJD.

The RJD, which at present has the highest number of MLAs in Bihar, helped his son Santosh Manjhi get a berth in the legislative council.

Ahead of the Lok Sabha polls, the Mahagathbandhan came to include Upendra Kushwaha’s RLSP and Mukesh Sahni’s VIP and Manjhi initially threw a fit stating that his party should be given a share of seats that was greater than those of all alliance partners except the RJD.

He, however, relented and settled for only three – far less than the nine given to Congress and five to RLSP. At the hustings, his party lost all the seats including Gaya where he was pitted against a relative newcomer Vijay Manjhi.

Earlier, Manjhi toured the adjoining Nawada district where he came out in defence of Samajwadi Party leader Azam Khan saying he must not resign though he should accept the demand for an apology over his remark about Lok Sabha Deputy Speaker Rama Devi.

“When brothers and sisters, mothers and sons meet and plant a kiss by way of affection, the gesture is not seen as having sexual overtones. Azam Khan’s words are not being taken in the right spirit. I, therefore, hold the opinion that he need not resign but since all parties have objections he should tender an apology and be done with the matter.