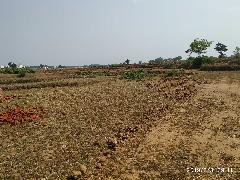 New Delhi: It was a sunny afternoon, with severe heatwave prevailing in the country. Perka village at Murhu development block in Khunti district of Jharkhand was deserted. The residents – who are mostly Munda Adivasis (tribes) with a population of 550 – were staying indoors to protect themselves from the heatwave. Few of them were seen resting on bare cots in a shaded place.

Majority of them did not know that the State Government has registered three plots of the village’s forest which cover approximately 1,214 acres, with the Land Bank (prepared by the state’s Department of Revenue and Land Reform). It is a part of the 21 lakh acres of ‘ghair mazurwa’ (uncultivated and common) land being acquired for a Land Bank across the state to woo industries. Ownership of the community on such lands (Jamabandi title) have been cancelled. The government claims that it is a big leap forward in development as it would help in facilitating land allocation to industrial units.

Interestingly, in 1932, the villagers were given the forest land for their use. This has been officially recorded in the land records in the Khatiyan Part – II. As per the provisions of the Forest Rights Act, 2006, the government authorities should have recognised the rights of the villagers on the village’s forest.

“I have land record papers of 1932, where we have been given the right to use the forest land. How can the government take away our forest land and enlist it in the Land Bank without the consent of our Gram Sabha (village council)?” asked Petrus Tiru, 55, expressing his shock over the development.

He was interrupted by a 50-year-old Santosh Soy who said, “It has been 20 years since we have been protecting our forests. We keep a watch round the clock to ensure that no one cuts trees. We also discuss how to protect and minimise the use of forests in our weekly Gram Sabha meetings.”

The Land Bank has been created with an aim to attract investments in the state by allocating land to corporates for establishing their industries. While launching ‘Momentum Jharkhand’ — an investment promotion campaign of his state — in Bengaluru on July 27, 2016, Chief Minister Raghubar Das had said, “Land acquisition has never been a challenge for us because we have a Land bank of 1,75,000 acres readily available for different industries to set up their businesses. Farmers are ready to give us land as we are paying a handsome price. We currently hold 40% of India’s natural mineral wealth and we are on the way to becoming the power hub of the country by 2019.”

However, the tribals allege foul play. They believe that the government is using a trick to grab their forest, community and religious land to hand over to corporations who exploit these resources in the name of development projects to make a profit.

Citing an example to strengthen this allegation, Gladson Dungdung – a Ranchi-based tribal rights activist and author – told NewsClick, “The state government acquired 42 acres of uncultivated land at Dambuli village in West Singhbhum district’s Manoharpur block and gave it to Vedanta. Now, the company is attempting to acquire the private land of Adivasis against their consent. They don’t have a way to reach the land they cultivate on.”

Why does the state government need a Land Bank after all?

Jharkhand has a long history of Adivasis’ struggle. The traditional dwellers have been fighting to protect their identity, autonomy, culture, languages, land, territory and natural resources for more than 300 years. The creation of Jharkhand – which was carved out of the southern part of Bihar on November 15, 2000 – as a new state in the political map of India, was one of the results of the struggle.

“After the formation of the state, the Adivasi struggle has been concentrated on anti-displacement movement. As many as 74 MoUs (memorandum of understanding) were signed by the successive governments one after another within a decade. Fortunately, none of the mega project was materialised. The Adivasis forced the Arcelor Mittal, Jindal Group and Tata Steel Ltd. to desert the proposed land for their dream steel projects,” said Dungdung.

Learning from the past, the Bharatiya Janata Party (BJP) government – which took over in 2014 – changed the land acquisition strategy. On December 31, 2014, the government through its Department of Revenue and Land Reform issued a circular to deputy commissioners of all the 24 districts, asking them to conduct a survey and prepare data of all kinds of land, except for private land, for the Land Bank. After the data was prepared, the department created a new website, where 2,097,003.81 acres of land was shown as government land in the Land Bank.

The website was launched on January, 5, 2016, by the Chief Minister. It was followed by the signing of 210 new MoUs with the corporate houses during the ‘Global Investors Summit’ held at Khelgaon, Ranchi on February 16, 2017.

“Now, the government has been attempting to acquire the common land, sacred groves and forest land without (free, prior and informed) consent of the communities. What is disturbing us is the fact that several plots of land that have been enlisted in the Land Bank, declaring them uncultivated or owned by the government, actually belonged to Gram Sabhas. Under the tag of the government land, three categories of land were acquired for the Land Bank – (a) common lands such playgrounds, village paths, land meant for grazing of animals; (b) sacred groves (Sarna, Deshavali and Jaherthan); (c) forest land, whose entitlements were supposed to be given to the Adivasis and other traditional forest dwellers. In a nutshell, the government is ensuring corporates’ entry into tribals’ villages through the Land Bank,” he alleged.

Declaring it a “gross violation” of sections 4(1) of the Forest Rights Act 2006, which recognises and vests forest rights on Scheduled Tribes and other traditional forest dwellers on forest land, Dungdung concluded, “The Act categorically mentions in the section 4(1) that no member of a forest dwelling Scheduled Tribe or other traditional forest dwellers shall be evicted or removed from forest land under his occupation till the recognition and verification procedure is complete. In fact, the forest rights are denied to the community by enlisting the forest land and community forests in the Land Bank, which also violates the Provisions of Panchayat (Extension) in Scheduled Area Act (PESA) 1996 that recognises the self-determination of the Adivasis and empowers the Gram Sabha to manage the natural resources. This is also a violation of the Supreme Court judgment in the case of Odisha Mining Corporation Vs Ministry of Forest and Environment and others (c) No. 180 of 2011, which clearly states that the Gram Sabha is the owner of the natural resources; therefore, the common land, sacred groves and forest and forest land of the villages cannot be acquired without the consent of the Gram Sabhas.”