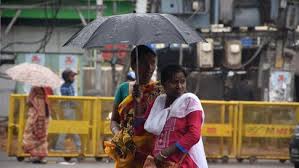 Jharkhand is witnessing a 35 per cent rainfall deficit in this monsoon season, a Met Department official said here on Monday.

“Jharkhand has received only 181 mm rainfall against the normal 276 mm till now. In the last two days, the rainfall has improved and it will continue for next 48 hours,” S.D Kothal, Director of the Ranchi Met Department, told IANS.

“But the rain will shift towards the Himalaya region from July 10 to 12. When it will retreat, state will then witness an improvement of the rainfall.”

The worst affected areas of the state are Godda and Pakur where rainfall shortage is more than 70 per cent. Garwah and Chatra have witnessed over 60 per cent deficiency.

Due to the shortage, paddy sowing has not gained momentum.

Jharkhand has not received normal rainfall in the last two years.

In 2018, the Jharkhand government had declared 129 blocks in 18 districts as drought-affected and released Rs 490 million for immediate relief.

As per the Met Department’s data, Jharkhand received 72 per cent average rainfall in 2018. However, in some places, it was less than 50 per cent. The worst affected were Pakur and Koderma.