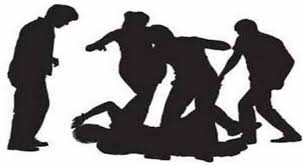 A mob thrashed three men and allegedly forced them to chant “Jai Shri Ram” in Ranchi, Jharkhand, The Hindu reported on Saturday.

Aamir Wasim, who lodged a complaint at the Doranda police station, said he and his friends, Altaf Ali and Ali Ahmed, had gone to the airport area on Friday to take photographs when the incident took place. “We were riding our two-wheelers and were in kurta pajamawhen some people besieged us,” Wasim told The Hindu. “Without any provocation, they beat us up and told us to chant “Jai Shri Ram”. As the crowd got bigger, we fled from the spot,” Wasim said, adding that security personnel near the Birsa Munda Airport rescued them.

Community members blocked the MG Marg near Church Complex, demanding that the culprits be arrested. The demonstration went on till late evening on Friday. “We have deployed police along the MG Marg to prevent further escalation,” said Senior Superintendent of Police Anish Gupta on Saturday. “Now the area is peaceful. We are keeping a close watch on the situation.”

A similar incident was reported in Barpeta district in Assam on the same day. Three youths were beaten up and allegedly forced to chant “Jai Shri Ram” in Jyoti Gaon area, according to Northeast Now.

Wajed Ali, who filed the first information report, said four people on two motorcycles thrashed Rakibul Haque, Burhan Ali and Kurban Khan, who were working there at a medical store. “They also forced the trio to chant “Jai Shri Ram”,” Ali said. Ali claimed the four suspects verbally abused Haque and tried to kill him by strangling him.