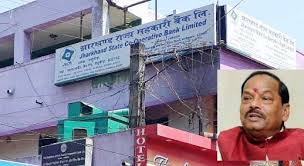 Deputy Registrar Jaydev Prasad Singh, General Manager in the State Cooperative Bank has been accused of having indulged in financial irregularities.

During the investigation, it has been found that bank has distributed fake loans and it made no efforts in recovering the loaning amounts. The officers are also supposed to have tampered with books. The scam is of about Rs 54 crore.

After the investigation, Ramkumar Prasad, MD of Jamtara Central Cooperative Bank, Deoghar has also been suspended. Prasad has been accused of disbursing fake loans during his posting in Deoghar.

On the basis of investigation, as suggested by the inquiry committee, the department has also suspended the district cooperative officer of Chaibasa Lal Manoj Shahadev posted in the regional office of the bank at Chaibasa.

As per the inquiry report, the department has ordered to register FIR against Alok and seven other employees. The employees have been suspended.

Indian Cooperative’s effort to contact the Bank Chairman Abhay Kant Prasad drew a blank as his phone was switched off. The octogenarian cooperator Abhay Kant Prasad is held in high esteem due to his no-nonsense approach. People in know of things say that it is a matter of surprise that scamsters have succeeded in their plan below his nose.

The committee constituted for investigation has prepared a 250 page report. According to media reports, the preparation for the transfer of state registrar Suchitra Sinha, who has acted tough in the matter with the help of new GM Sushil Kumar, is in the process.

Readers would recall that after taking over the charge of General Manager of the bank, Sushil Kumar had listed out several frauds. He drew massive irregularities to the attention of State Registrar of Cooperative Societies and urged investigation into the matter.

It is at his urging that the Government had constituted an inquiry committee headed by the Registrar that revealed various irregularities including disbursing loans through fake accounts.