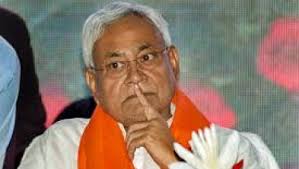 Unlike the first eight years of his government, the second anniversary of the homecoming of Bihar chief minister Nitish Kumar on July 27 to the National Democratic Alliance was a virtual non-event.

There was no celebration, no release of Report Card to the mediapersons to highlight the achievements of the state government and no grand party organised on this occasion and no doling out of million of rupees as advertisements to newspapers and other media houses.

Instead, the chief minister chaired a six-hour long review meeting on natural disaster as 13 districts are reeling under flood and 20 in the grip of drought. Nitish’s second innings with the Bharatiya Janata Party is very much different from the previous one––that is between November 24, 2005 and June 16, 2013.

He is seldom heard boasting of big achievements of his government. Even during the campaigning for the Lok Sabha election earlier this year, the Bihar chief minister would be heard highlighting the achievements of the Narendra Modi-led NDA government at the Centre.

This is a significant departure from the past. Nitish would then use anniversaries of coming to power, frequent ‘yatras’ and occasion like Bihar Diwas on March 22 to market his government’s achievements.

No such exercise is undertaken now. There is no talk of Bihari sub-nationalism or ‘asmita’ (pride). Even the demand of special category status to Bihar is seldom raised.

Nitish tried to flex some muscle recently after the demand of more than one berth to the Janata Dal United in the Union cabinet was not accepted by the Prime Minister.

As if that was not enough, some hardliners within the BJP led by Union minister Giriraj Singh started demanding the snapping of ties with the Janata Dal United. They are hopeful that the BJP can win the next year’s Assembly election alone.

There is no dearth of people in political circles who are of the view that Nitish is looking for another ‘home’ after his famous ‘’ghar wapsi’ exactly two years back.

The Rashtriya Janata Dal has opened its door for him, albeit partially.

While other constituents of Grand Alliance like Congress and Jitan Ram Manjhi’s Hindustani Awam Morcha may have no problem in aligning with Nitish once again. But that may not be the case with the Rashtriya Lok Samata Party, whose leader Upendra Kushwaha, never sees eye to eye with Nitish.

Incidentally the RLSP is the only party which has taken to streets on several occasions after the May 23 debacle to highlight the failure of the Nitish Kumar government, be it over the deaths of hundreds of children due to acute encephalitis syndrome, heat wave, floods, plight of farmers or deplorable condition of education in the state. In the first week of July the party even undertook a march from Muzaffarpur to Patna.

Thus two months after the Lok Sabha election and two years after Nitish’s ‘homecoming’, the politics in Bihar continues to remain fluid. Nitish is still wondering as to whether he would go to poll next year on his own agenda or that of Narendra Modi.

However, a day after the second anniversary, Nitish managed to get a prize catch in the form of former Union minister Ali Ashraf Fatmi who on July 28 crossed over from RJD to Janata Dal United. Another good thing for the Bihar CM is that the main opposition party, the RJD is in dormant state and the leader of opposition in the state Assembly Tejashwi Prasad Yadav stayed away from the entire Monsoon Session of the House.