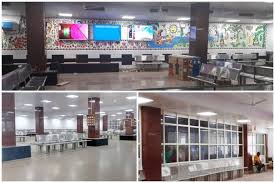 According to information shared by the East Central Railway zone, the new waiting hall has been equipped with 7 HD screens of 65″. The digital screens will display entertainment-related content as well as train information 24×7. The waiting hall has been beautified to promote local art with all the walls being covered in Madhubani painting in bright and attractive colours. The entire waiting hall is centrally air-conditioned. Moreover, additional fans have been provided as well. Also, the entire waiting hall is lighted with 100 per cent LED fixtures concealed in the ceiling.

Piyush Goyal-chaired Railway Ministry is effortlessly working towards beautification and redevelopment of stations across the country. Not only are the railway stations being beautified, but they are also being well equipped with various modern facilities. Some of the stations, which were renovated recently include New Delhi railway station, Kamakhya Junction, Asansol Junction, Mathura Junction, Haridwar Junction, Jaipur Junction, Lonavala, Adoni, Bellampalli, Sainagar Shirdi, Manduadih, Kurnool City railway station, etc.