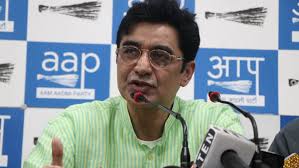 The move comes ahead of the assembly elections in Jharkhand scheduled later this year, and in Delhi, which is likely to take place in early 2020.

AAP is in power in Delhi, with party chief Arvind Kejriwal as the chief minister. They, however, do not have a significant presence in Jharkhand where the state’s politics is dominated by the ruling Bharatiya Janata Party (BJP) and the opposition alliance of the Congress and the Jharkhand Mukti Morcha.

“Today I am joining AAP because of the political situation in the country. AAP is practising the politics of good governance and no corruption. There are a lot of people from Bihar and Jharkhand, from where I come, who have moved to Delhi and have benefitted from the government’s schemes in the areas of health and education. The money they save because of free water and electricity, they are able to use elsewhere,” Kumar said. “People of India who do not have any connection with politics have entered this area and are making people see how clean politics can be.”

“An important politician has joined AAP today. He has served the country as an Indian Police Service (IPS) officer and a parliamentarian. We have known each other since the days of the India Against Corruption movement. He will work in other states as well as in Delhi where the AAP has a presence,” Sisodia said.

Kumar had resigned as the Jharkhand unit chief of the Congress last month amid a leadership crisis in the state unit. Kumar had alleged that many senior leaders were seeking “to grab political posts for personal benefit and have made attempts to bypass the systems that have been put in place to benefit the party”.

Separately, on Thursday, Delhi speaker Ram Niwas Goel disqualified legislator Alka Lamba from the assembly after she resigned from the party and joined the Congress.

Kumar has a medical degree and has served as an IPS officer in Bihar and Jharkhand. He was considered close to Rahul Gandhi and was handpicked to lead the party in Jharkhand.