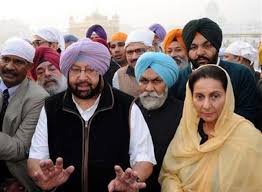 Jharkhand’s Jamtara has earned a name for being a notorious hub of cybercrime. This time, a group has managed to fraudulently withdraw over Rs 23 lakhs from the account of Punjab MP Preneet Kaur, wife of Punjab’s Chief Minister Captain Amarinder Singh.

Seven days ago, the mastermind Ataul Ansari, called up Preneet Kaur when she was attending the Parliament session. Masquerading as a State Bank of India (SBI) manager, Ataul asked for the ATM PIN and OTP number from Preneet Kaur.

He told Preneet that her salary has to be credited in the account and the vital information is needed immediately. After securing the PIN and OTP, Rs 23 lakh was withdrawn from Preneet Kaur’s account in three transactions. Sensing foul play, she lodged a complaint with the police.

This is when Punjab Police detected a connection with Jamtara. Jamtara SP Anshuman was contacted by Punjab Police. Jharkhand Police and a special team from Punjab acted in tandem and made a breakthrough. They nabbed Ataul Ansari on Tuesday from Karmatar village. Ataul Ansari has now been taken on remand by the Punjab Police.

Karmatar has its own tainted past. Few years ago it was a hamlet of a few huts. The cyber frauds in dreams of opulence resorted to means that would get them fast money. Now the once sleepy hamlet dotted with small huts has transformed into a town of palatial houses.

Police reports reveal that cyber crime started in 2013 in Jamtara. More than 110 criminals have been arrested from Jamtara over time by police of different states.

Around other 90 cyber criminals have been identified and are on the radar of ED for amassing wealth of more than Rs 50 crore.

Recently, Delhi Police picked up one Sitaram Mandal for allegedly hacking the account of Amitabh Bachhan and withdrawing a sum of Rs 5 lakh.

Similarly a Union minister lost Rs 1.80 lakh, an MP from Kerala suffered a blow of Rs 1.60 lakh and a BJP MLA from UP was cheated off Rs 5,000. The frauds were all found to be connected to Karmatar.

Jamtara in Jharkhand has carved out a name for being notorious and a hub of cybercrime. Located in the Santhal Pargna region, the district has been a crime-prone zone for a long time.

Frauds had earlier made a cottage industry out of breaking wagons and looting train passengers on board by duping them with spiked food. Over the years the modus of operandi might have changed but the tendencies to mint easy money from innocents by deceit continues.