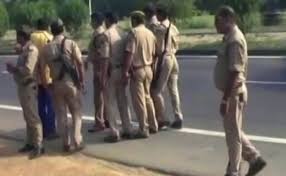 Latehar, Jharkhand: The headless and naked bodies of an 11-year-old boy and 10-year-old girl were found in Jharkhand’s Latehar district today, the police said.

Latehar Sub-Divisional Officer (SDO) Jai Prakash Jha said the bodies, found buried under a pile of sand near a house, were exhumed. The heads have not been found.

The children had been missing since Wednesday and their families had searched the village for them but did not inform police, the SDO said.

The villagers noticed a part of a leg protruding from under a pile of sand this morning and they informed police.

A police team reached the spot, dug up the area and found the two naked bodies. There was a locked house nearby and the team broke into it to find bloodstains inside.

Villagers told reporters that several ”diyas’‘ (earthen lamps) and some grains were found near the bodies and they suspect the two were sacrificed. The owner of the house is on the run, the police said.

Deputy Inspector General of Police Vipul Shukla said that it was merely a conjecture and more information will be revealed after the investigation is complete.