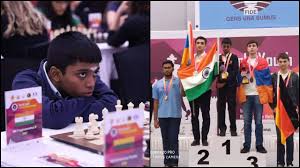 After the 14-year-old R Praggnanandhaa won gold in the under-18 open category in the World Youth Chess Championship, his sister Vaishali said the whole family is ‘happy and proud’ of her brother’s achievement.

“We are very happy and proud. I saw the video. It was very emotional, we felt very happy. It was all his hard work. He deserves it,” Vaishali told ANI.

Praggnanandhaa achieved the feat in Mumbai on Saturday. He scored an impressive and unbeaten 9/11 and he ended with a performance rating over 2700.

“Congrats!! Very proud of you!! In our next session in Chennai, you have some nice games to show me !!” Viswanathan Anand tweeted.

Vaishali said it was a ‘really nice’ gesture of Anand as she said: “It was really nice of him. He tweeted about his achievement and it was very nice.”

Vaishali further stated that she is lucky to have a brother like Praggnanandhaa.

“He is 14-year-old and has won the U-18 world championship, it is really great. I am really lucky to have him as a brother,” she said.