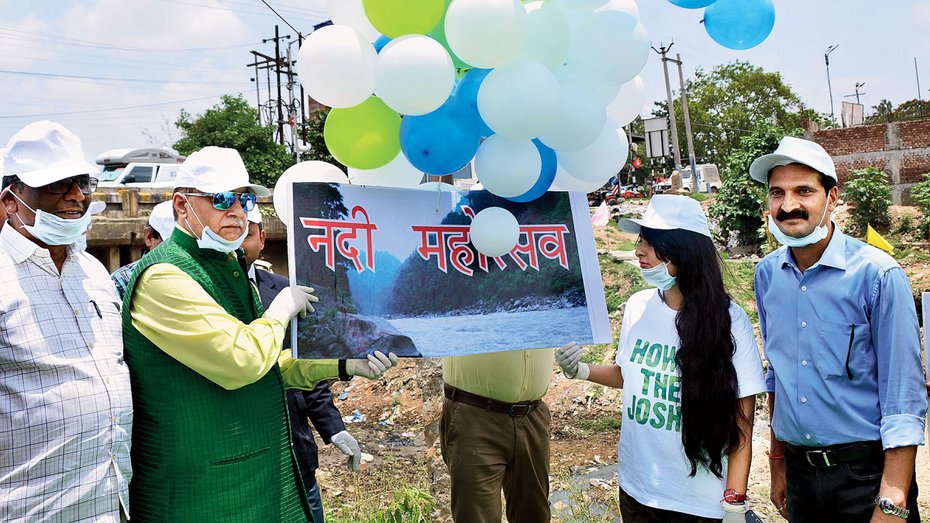 The state forest department on Sunday started planting trees along the banks of the Harmu rivulet in the capital to try and rejuvenate the water body that has been reduced to a dirty drain.

A part of the month-long Van Mahotsav-cum-Nadi Mahotsav inaugurated by chief minister Raghubar Das on July 7 near Jumar river, the rescue of Harmu rivulet was a stiff challenge, said people present at the site, as it was clogged by wastes from houses around it.

“The river is dead and looks even worse than a drain,” said Justice S.N. Pathak of Jharkhand High Court who was the chief guest on the occasion. He added that “oxygen or Coramine (the popular former trade name of nikethamide, a stimulant which mainly affects the respiratory cycle) can’t bring the dead back to life”, but also appreciated the forest department’s efforts to green the area. “Trees give us oxygen to survive,” the judge said.

State’s principal chief conservator of forests (PCCF) Sanjay Kumar, who was present with over a 100 others comprising forest officials, NCC cadets and citizens, said he hoped that planting saplings would help improve the condition of the rivulet and its surroundings.

“About 6,000 saplings will be planted along a 2km stretch by the side of Harmu rivulet within the capital,” Ranchi divisional forest officer (DFO) Saba Alam Ansari said. “We will plant trees wherever space is available,” he said without going into the open secret of encroachment in the area. He added that as the area was beside a road in the city, they were planning on flowering trees such as gulmohar, peltophorum (copperpod or yellow flame tree) and night jasmine, saplings of which would be protected by cattle-guard and wire fencing.

PCCF Kumar had earlier told the media that 8.26 lakh saplings would be planted on a total of 274km of banks along 44 rivers across the state during the Vanmahotsav-cum-Nadi Mahotsav that began on July 7 and will continue till August 6. The department had planted about 9 lakh saplings along the banks of 24 rivers in as many districts of Jharkhand last year of which about 80 per cent survived, he had added.

Scores of Harmu residents turned up at the planting event. “Harmu rivulet may be in bad shape but trees are the need of the hour and I will do my bit,” said Md Gafoor who stays nearby. “I’ll take a few saplings from the forest department to plant on the small plot that I own.”