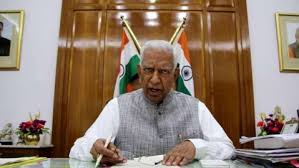 Critically examine the role of Governor in the state politics of India, especially in the context of Bihar. Is he just a puppet?

This was the question––considered objectionable by some––asked in the General Studies-II exam of the Bihar Public Service Commission, which concluded on July 16. The GS-II exam was held on July 14.

The question sparked off controversy forcing the BPSC to issue a clarification and announcing that was blacklisting the question-setter. If the sources are to be believed the expert who had set the paper is a retired bureaucrat residing outside Bihar.

It all started after a Hindi daily Dainik Jagaran carried a report on July 15. The daily was more particular over the translation of the word puppet. As most of the examinees write their answers in Hindi the puppet was translated as ‘kathputli’. As the question was asked in the context of Bihar, according to sources, the Raj Bhavan at Patna too was upset over it. There was even demand for filing a case against the expert.

Soon other newspapers, including English, followed and it was alleged that the word ‘Kathputli’ was offensive. The Chairman of the BPSC, Shishir Sinha, himself a retired IAS officer, called on the Bihar Governor, Lalji Tandon, to explain the position of the Commission. However, sources in the BPSC said that he was actually summoned by the Governor.

Some sections saw in the question a political conspiracy. They held that since chief minister Nitish Kumar is unhappy after his party Janata Dal United failed to get due representation in the Narendra Modi cabinet, somebody in the Commission used this ploy against the Governor––actually an appointee of Centre.

So far as the question is concerned, most people felt there was nothing wrong in it. “Questions over the role of the Governor are asked in various Commission exams, including the UPSC,” one of the examinees told this correspondent.

Another candidate recalled that an invigilator in his room was very appreciative of the question as Governors are in the news for all the wrong reasons in the recent years, be it in Bihar, Goa or Karnataka.

Mediapersons are themselves divided over the whole story carried by Jagaran and are of the view that a section of the Press had unnecessarily made a mountain out of molehill.

“This is a total non-issue and unnecessarily played up by the media. Such questions are often asked,” commented a political observer. However, Dainik Jagaran stoutly defended itself and strongly held that words like ‘Kathputli’ cannot be used for constitutional functionaries like the Governor.

When reminded by this correspondent that noted legal luminary, Soli Sorabjee wrote a book “The Governor: Sage or Saboteur”, he replied that anyone could write anything in a book but a derogatory term should not have been used in a Public Service Commission examination.

BPSC too in a notification clarified that apparently there was nothing wrong in the question. Only the word ‘Kathputli’ was misplaced. As the question was asked in the context of Bihar there was some misunderstanding on this issue and that everything had been sorted out.

If reports are to be believed, the Commission is likely to set up a committee to decide how to deal with the question as a large number of candidates chose to answer this particular question though they had other options.