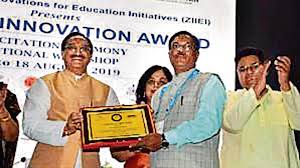 Virendra Kumar, headmaster of Pawra Middle School in Gaya’s Gurua block, has been honoured by the union ministry of human resources for his efforts towards educating children in an area hit by Maoist violence.

Union minister Ramesh Pokhrial gave away the award to Kumar at a function in New Delhi on August 18.

Earlier, Kumar was honoured by Sri Aurobindo Society, which had earlier sought innovative ideas from teachers across the country with regard to teaching in schools. Three lakh teachers submitted their ideas, of which 66 teachers, including two from Bihar, were selected for the honour. The two teachers who got the award were Kumar and Mukesh Kumar of Begusarai.

Kumar, himself son of a teacher, was promoted as headmaster of the Pawra school in 2017. He was surprised to see low number of students and teachers in the school. “The next morning, I travelled around the village and realised villagers were reluctant to send their children to school. After much persuasion, some agreed to send their wards to the school,” said Kumar.

Gradually, children started coming to the school and the attendance of students shot up to 95 per cent from 20-30 per cent.

“’We now have 341 students enroled. I first tipped two kids from each class and made them the mohalla leaders. I also gave whistles to every mohalla leader and asked them to blow the whistle while leaving home for school, to gather other fellows. The kids’ team moves around the village half-an-hour before school starts. And thus, all children reach here on time,’’ Kumar said.