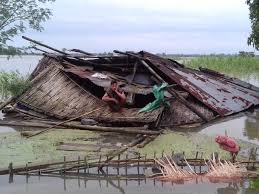 The death toll in Bihar and Assam floods has mounted to 198. More than 1.17 crore people were displaced in the devastating floods.

Around 8,246 villages are reported to have been affected in both the states. Rivers like Brahmaputra and Ganges submerged 30 districts in Assam and 12 districts in Bihar.

A Rapid Need Assessment (RNA) was conducted by Caritas India, Christian Aid, Adra with the support of Inter-Agency Group (IAG) members and district officials from Government of Assam and Bihar to access the situation. The assessment was done in 6 districts of Assam (Lakhimpur, Morigaon, Chirang, Kamrup, Barpeta & Dhemaji) and 4 districts of Bihar (Sitamarhi, Madhubani, Purnea & Araria).

The assessment revealed that 90% families in Assam and 50% families in Bihar have no access to safe drinking water. All the drinking water sources i.e. open wells and handpumps (apart from the few raised ones) are already contaminated. The need for Water, Sanitation, and Hygiene is essential to circumvent the offset of any major public health challenges.

Bimala Brahma, 65-year-old survivor from Dwimugori village of Chirang is traumatized of her loss. “I had a small piece of land where I had cultivated paddy which is gone underwater”, narrates Bimala when asked about her source of livelihood. After her husband’s death she used to stay alone in her small house which was also taken away by this flood. The need for psychosocial support is felt as people still could not recover from their loss.

The team has also recommended for burgeoning (post disaster) market system, cash-based programming to ensure that the choice of building back better remains firmly in the hands of the affected communities

In Assam alone, 1.79 lakh hectare of crop area was destroyed leading to the heavy loss of livelihood and source of income. The damage data of Bihar is still unavailable due to inaccessibility of the government in the target districts because of the severity of the floods. Most vulnerable communities like dalits, mahadalits and adivasis have lost their kharif crop which has created a deficit in the food security and a potential negative impact on their survival.

Educational institutions also suffered partial or entire damage. Most of the schools are being used as shelter homes by the affected/displaced population. Children reported that they have lost their certificates and other academic documents in the floods. There is a need for safe child centres spaces (CCS) that would benefit the affected children from physical and mental abuse, trafficking and for immediate future.

Caritas India Executive Director, Fr. Paul Moonjely appeals to all the people of goodwill to come out openly and support the cause of the victims who are affected by this massive flood, both in Assam and Bihar. Based on the report findings Caritas have started its response in Morigaon, Kamrup, Chirang & Lakhimpur districts of Assam and Sitamarhi of Bihar supporting 7500 families with WaSH support and hygiene promotion. Caritas India also planning to provide 3000 shelter kits in Bihar. Fr. Paul shared that Caritas India will come out with more support in the days to come to reach out to more families with livelihood and shelter support.

Caritas India is reviewing the situation every minute to access the damage and plan further intervention. Fr. Jolly, Assistant Director, and Fr. Sushil Modi, Administrator of Caritas India has made an emergency visit to Assam and Bihar respectively to express the solidarity and plan for humanitarian interventions.