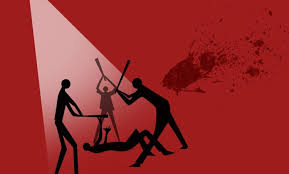 Patna: With incidents of mob violence rising during the last four days, the fear of mob-lynching has once again come to haunt Bihar. Over two dozen people, mostly the poorest of the poor, have been attacked and badly beaten up by mobs and at least two were lynched on suspicion of being child lifters in the state.

Mobs also attacked, thrashed and punished over half a dozen people in different places across the state on various charges, such as harassing girls and allegedly stealing mobile phones and other items.

The rise in such incidents is giving sleepless nights to top brass of the Bihar police. Taking serious note of the continuing mob violence, the police has so far arrested more than 40 accused and has appealed to people not to take law into their hands on the basis of mere suspicion or rumours.

Rumours have been spread about of child-lifters in Patna and other places and mostly the poor, such as beggars, vendors and physically challenged people have become the victims of mob violence.

At least two mentally-challenged middle-aged people were beaten to death and over a dozen injured in separate incidents of mob violence in Patna district alone in last two days. A man was lynched on Saturday night by a mob in Chulhaichak under Rupaspur police station and another man was beaten to death on Sunday by a mob at Kalichak village under Dhanarua police station. Both were lynched by a mob on suspicion of being child lifters.

Both the victims have not been identified by police so far.

Patna police officials admitted that more than one dozen incidents of mob violence have been reported in Patna in the past three days. “All the mob violence incidents are results of rumours about child lifters. Police have been trying to counter these baseless rumours to check and control mob violence” Patna senior superintendent of police Garima Malik said.

Malik told NewsClick that as most of the mob violence on the basis of rumours of child-lifters was being reported from rural areas near Patna, police have been asked to be on alert in  Danapur, Maner, Masaurih, Naubatpur and Punpun.

A senior police blamed social media for the spurt in rumours and resultant mob violence.

Since last Thursday, more than 20 cases of mob violence reported in Bihar. In some cases, mobs even attacked police teams that tried to rescue the victims.

On Saturday, two Sikh men from Haryana were badly beaten up by a mob on suspicion of being child lifters in Patna, before they were rescued by the police. Similarly, two youths were badly thrashed by a mob in Danapur near Patna on Saturday on similar suspicions.

Three beggars including two woman were thrashed on Sunday by a mob near Neema railway halt in Patna on suspicion of being child lifters. Timely arrival police saved them from being lynched by a mob of 200 villagers armed with traditional bamboo sticks.

An auto-rickshaw driver in heart of Patna was beaten by a mob on Sunday after some women raised alarm of suspected child lifter.

A youth was thrashed on Sunday evening by a mob in a village near Bodh Gaya in Gaya district for his alleged involvement in kidney racket. But police managed to rescue him.

In another case, two minors were beaten up, their heads tonsured and faces blackened by a mob in a village in Saharsa district on last Thursday for alleged harassment of girls.

The rise in the number of mob violence incidents started after July 20 in Saran district, when three suspected cattle thieves were beaten to death in a village by a mob consisting of mostly youths.

The rise in mob lynching incidents have come as an embarrassment for Chief Minister Nitish Kumar who claims to have brought ‘sushasan’ or good governance to Bihar. Especially, in rural Bihar, incidence of ‘mob justice’ have become common.

The failure on the part of the state government to punish people involved in street justice or mob rule is being seen as the main reason for encouraging people to deliver instant justice without fear.