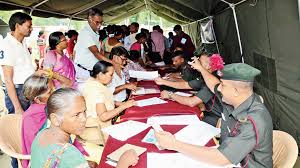 Over 700 people, comprising retired defence personnel or their dependants, sought redressal of their grievances at the 168th defence pension adalat, a two-day affair, that began at Kerketta Auditorium of the Dipatoli Cantonment in Ranchi on Thursday.

A range of problems were highlighted and most were resolved, said sources.

For instance, Surya Prasad Singh, an ex-serviceman from Ranchi who retired from the army more than 15 years ago, is yet to get the commutation value of his pension restored.

Sujit Shukla, an ex-serviceman from Garhwa who was with the army for 13 years and four months, said he had been denied pension.

“I had commuted a part of my pension at the time of my retirement. But, this yet to be restored though I ought to get it back now,” said Surya Prasad Singh.

“I’ve come here to seek reconsideration of my case,” said Sujit Shukla. “I had to retire… but was with the army for 13 years and 4 months, which is less than the 15 years of active service that is required to qualify for pension,” he explained, adding that he wanted to appeal to the authorities so that his case could be reconsidered and pension sanctioned to him.

It was inaugurated on Thursday by Governor Draupadi Murmu.

“Since such a pension adalat has been organised in Ranchi, retired defence personnel should utilise it to their fullest benefit,” she said, going on to praise ex-servicemen for their contribution to the nation. She also thanked the armed forces and defence authorities for organising the adalat.

PCDA Vishwajit Sahay, in his address, spoke of the steps being taken to provide better services to defence pensioners by introducing a pensioners portal and issuing electronic pension payment orders (e-PPOs).

“More lines have been added to our call centre with toll-free number1800-180-5325 so that defence pensioners can seek clarification on any doubt or register their grievances,” he said.

CGDA Sanjiv Mittal said a comprehensive pension package was in the offing. “The entire process of pension sanction would be computerised,” he said. The adalat received an overwhelming response with 680 people registering grievances till 2.20pm on Thursday. More people were expected to turn up, opined a local defence accounts official, adding that most of the problems were likely to be resolved on the spot.