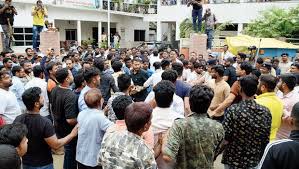 Congress factions resorted to an ugly clash in front of the party office on Thursday afternoon, forcing police to use force and detain a few leaders, indicating a growing belligerence among party men eager to ascribe blame for the poor showing in the Lok Sabha elections.

State party chief Ajoy Kumar, who arrived at the state party headquarters on Shradhanand road moments after the police managed to control the situation, addressed a gathering of loyalists and blamed a set of senior leaders for trying to “break the party”.

He did not mention names, but made it amply clear he was referring to former minister and Ranchi MP Subodh Kant Sahay, former state party chief Pradep K Balmuchu, former MPs Rameshwar Oraon and Furkan Ansari, all of whom have joined hands against him.

The Congress contested seven of 14 Lok Sabha seats in alliance with the JMM, JVM and RJD but could win only one.

By the end of the day, a senior Congress leader revealed that the party’s central leadership, already grappling with a leadership crisis, summoned all senior leaders of the state for a meeting in Delhi on August 3.

The leader also said that Jharkhand Congress minder R.P.N Singh called him from Delhi in the afternoon to find out what had happened.

The clash had its genesis in Wednesday night’s expulsion of former president of Ranchi district unit Surendra Kumar Singh and former state spokesperson Rakesh Sinha on disciplinary grounds for a period of six years.

A clash ensued. Stones and missiles were hurled freely. Police, who seemed to have been informed earlier, were on standby with officer in-charge of Kotwali police station S.N. Mandal deploying as many as 22 personnel.

“Police used mild force to disperse the crowd. One photojournalist was hit by stone and injured. Surendra Kumar Singh and Sinha were kept under preventing arrest for around two hours after which they were released. No FIR has been lodged,” Mandal said.

Before they were taken into custody, Surendra Kumar Singh and Sinha addressed the media, calling Kumar “incompetent and arrogant” for wanting to run the party like a “dictator”.

“Kumar will be remembered as the worst (state) president of the party. The downfall of the Congress in Jharkhand and expulsion of committed party leaders and workers are some of his notable achievements. He has set a record of expelling over 100 leaders and workers during his tenure. We have lost committed workers like Ajay Rai and Sunil Singh, whom he has expelled,” said Sinha.

In May, Kumar expelled a dozen leaders and workers of the Hazaribagh district unit. Several others were expelled from Ramgarh, Giridih and other district units.

“Our expulsion is blatant violation of the party constitution. As per rules, a showcause notice has to be issued, and a reply has to be given within two weeks. An expulsion is subject to approval of the working committee. In our case, no procedure was followed,” Surendra Kumar Singh alleged.

In his address to party men, Kumar, who was accorded a welcome with garlands, thanked his supporters and went on fire a volley of accusations against senior leaders. Kumar said that like others, he too was sad over the performance of the party in the Lok Sabha elections.

“We won one seat and lost two others with a narrow margin. This is not a battle for posts and power. There are some people who want to take control over the ticket distribution exercise for Assembly elections. They want to grab the entire party. I have dedicated my life to serve the people of Jharkhand. As a police officer, I was wounded by the bullet fired by criminals. What kind of language they have been using? I too can collect 50 men at a time,” he said.

Kumar said there were leaders who wanted tickets for themselves and their children.

“Those who were defeated in the parliamentary election will not take responsibility of their defeat. For the coming Assembly elections, tickets will be given to new faces, the young and the energetic,” he said.