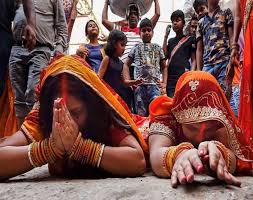 Rabindra Sarobar in south Kolkata will be closed for people from November 2-3 on the day of Chhath puja.

Scores of people flock to Rabindra Sarobar lake during Chhath where they offer flowers and other offerings dedicated to the Sun God. Kolkata Metropolitan Development Authority or KMDA that holds the custodian of Rabindra Sarobar lake, will handover administrative charge to Kolkata Police during the lockdown period.

“The KMDA will issue a notification on October 18 announcing the closure of Rabindra Sarobar from the noon of November 2 to noon of November 3. Copies of the notification will be sent to all police stations as well as transport associations so that everyone is aware that the lake will be out of bounds for 24 hours,” a KMDA official, who held a review meeting of arrangements to prevent violation of a National Green Tribunal (NGT) order that banned all rituals at the lake, said.

The NGT’s hearing on the issue is scheduled for Tuesday, October 15.

KMDA has already been facing the wrath for failing to implement the NGT order during Chhath puja in 2018 and 2017.

Thousands of devotees thronged to the water body and poured oil and ghee, burst crackers and played loud music in the green zone that is home to around 100 species of birds and several dozen species of animals and amphibians. KMDA has already held two meetings which saw local politicians, police and Bihari Samaj representatives in participation where it was decided to formulate a joint strategy to enforce the order.

On one hand where the KMDA has decided to keep the 73-acre waterbody, it has identified multiple waterbodies as alternative sites for Chhath puja. The necessary arrangement at these places — setting up of changing room, toilets, PA system, lights, ambulance and transport — have also commenced.

KMDA officials along with Kolkata Police held a joint recce at Rabindra Sarobar on Saturday to decide on ways to effectively prevent devotees from thronging to the lake during Chhath on November 2 and 3. All the 17 gates leading to 192-acre site were inspected by the team which also zeroed in on a location to set up a control room where feed from 176 CCTV cameras installed at the lake can be monitored during the 24-hour lockdown, the daily reported.

“To prevent a repeat of what happened in the past two years, the police will set up check posts 50 metre ahead of the 15 main gates. Additionally, we will have around 80 private guards in each shift manning the different gates along with more policemen. Since women turn up in large numbers, of the 177 private guards to be deployed, 72 will be female,” the official added.

A police officer told the daily that the deployment figures would be worked out to check trespassing as well as ensuring that the devotees, who turn up there, are transferred to the alternative venues. “The lake will have two layers of security. The control room that will be set up next to Nazrul Mancha will help monitor the situation. In case there is a breach, a force kept on reserve will be sent,” TOI quoted the officer saying.

In the run up to Chhath Puja 2019, KMDA plans to continue its awareness drive through announcements in all the peripheral wards. Directions to the nearest waterbody designated for Chhath Puja will also be installed at major roads in south Kolkata. Devotees from north, central and east Kolkata usually visit to the Hooghly River to perform the rituals.