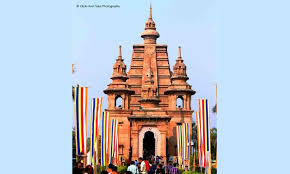 Sarnath considered one of the most important sites in the Buddhist Circuit makes the holy city of Varanasi an important pilgrimage centre for Buddhist pilgrims from Asia as well as tourists from all over the world. Located 10kms north east of Varanasi with its name derived from the Sanskrit word “Saranganatha” (Lord of the Deer) was the deer park where Buddha gave his first sermon and where deer roamed around without fear. There are several guides waiting at the entrance of this site to tell visitors about its history, legend and spiritual importance. Just as in Bodh Gaya, a number of countries which have Buddhism as a major religion like Japan, Thailand, Tibet, Sri Lanka and Myanmar have built temples and monasteries in Sarnath and these reflect their architectural styles our guide Ajay Tripathi informs us. This place typically presents an overview of Buddhist architecture. As we were familiar with these styles from Bodh Gaya we were more interested in seeing the viharas, stupas and the archaeological museum which houses the famous Ashokan lion capital.

Seven weeks after he attained enlightenment under the Bodhi tree at Bodh Gaya, Buddha is said to have traveled to Sarnath also known as Mrigadava, Rishipatana and Isapattana which in Pali meant a place where Holy men resided. It was here that the sangha or community of enlightened persons was formed after Buddha enlightened five persons with his teachings of Dharma. The sermon that Buddha gave to these five monks was his first sermon known as “Dhammachakkappavattana Suta” and we got to see the ruins of this stupa known as “Dhamek Stupa” Another important structure here where Buddha is supposed to have spent his first rainy season is the “Mulagandhakuti Vihara”. This was the main temple which had the famous Ashoka pillar in front and the well-known statue of Buddha in the “Dhramachakra Pravartana Mudra” was discovered in its vicinity. It is a long walk as we pass through the ruins of stupas and viharas that related to Buddhas stay here and his various teachings. There is lush green grass and trees all around and there are benches where tourists can sit for a while before they resume their walk.

The Sarnath Archaeological museum is indeed a veritable treasure house with various works of great historical importance preserved with care. It is one of the oldest site museums of the Archaeological Survey if Indi (ASI) and was built in 1910 by John Marshall, the then director general of Archaeology in India. Built entirely in sandstone it is designed like a vihara with a central hall and galleries that are like monastic cells housing historically important finings and several Buddhist antiquities. More than 6, 800 excavations were conducted at Sarnath leading to the discovery of rare antiquities our guide tells us. We walk past a rich collection of sculptures, edifices, parts of ruined structures, and stone carved images of Buddha and Bodhisattva.

The famous Ashokan lion capital here is said to have miraculously survived a 45-foot height drop to the ground from the top of the pillar. It became the national symbol and the national symbol on the Indian flag. A sculpture of four Asiatic lions standing back to back on an elaborate base carved out of a single block of polished sandstone, it was placed by the great Mauryan emperor Ashoka on top of the pillar he built at Sarnath in 250BCE. The four lions are said to symbolise the ‘four noble truths’ of Buddhism. We take more than an hour to see the well preserved artifacts that take us through the life and times of Buddha and his preaching of Dharma. Walking through the galleries one feels a strange peace that is almost meditative.

In the ruins and well preserved statues and findings from the site lies the essence of Buddha. Saranath is a worthwhile trip that brings alive the mystique of Budhha and the peace and love that pervade his teachings. It is both a spiritual sojourn and a historical overview and is a site worth visiting. 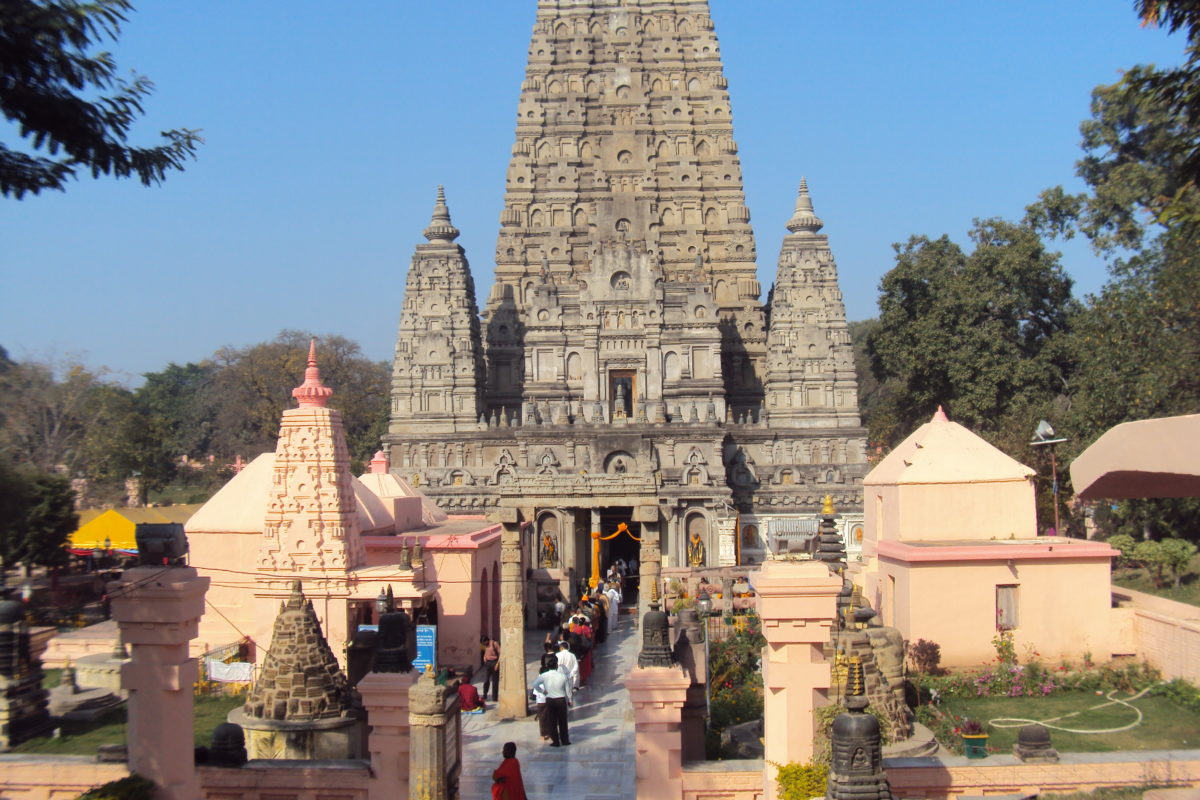 The Mahabodhi Temple Complex or Bodh Gaya, in India’s Bihar state – which is also known as the place where Gautam Buddha attained enlightenment – is probably one of the top 100 places in the world to visit before you die.

For Buddhists, Bodh Gaya is one of the four main pilgrimage sites related to the life of Gautama Buddha. The three other sites are Kushinagar, Sarnath (both in Uttar Pradesh state), and Lumbini (in Nepal).

In 2002, Mahabodhi Temple became a UNESCO World Heritage Site and though the complex is well-maintained, the surrounding town is still under developed.

Next to the temple, to its western side, is the holy Bodhi tree, under which the Buddha is said to have meditated and reached enlightenment. In the Pali Canon, the site is called Bodhimanda and the monastery there the Bodhimanda Vihara. The tallest tower is 55 metres in height.

In approximately 250 BCE, about 200 years after Buddha attained enlightenment, Indian Emperor Asoka the Great who was one of the rulers of the Mauryan Empire – one of the world’s largest empires at its time – is said to have visited Bodh Gaya with the intention of establishing a monastery and shrine.

As part of the temple, he built the diamond throne, called the Vajrasana, attempting to mark the exact spot of Buddha’s enlightenment. Asoka is therefore considered the founder of the Mahabodhi Temple.

One of the interesting features of the sprawling complex is the Mucalinda Lake in the centre of which is a sculpture of Buddha seated under the hood of a cobra. It is said that when Buddha was spending his sixth week of enlightenment here, a cobra and other creatures protected him from severe thunderstorms.

Rajgir, the first capital of the kingdom of Magadha, a state that would eventually evolve into the Mauryan Empire, is not far from the temple and also a must visit. Its date of origin is unknown, although ceramics dating to about 1000 BC have been found in the city. This area was one of the favourite places for Gautama Buddha and the well known ‘Atanatiya’ conference was held atop the mountain called Vulture’s Peak.

Known for the Vishwa Shanti Stupa, located at a considerable height, one of the ‘adventurous’ aspects of the place is that you can take a ride in a cable car on a ropeway to ascend and descend. Rajgir is also famous for its hot water springs, locally known as Brahmakund, a sacred place for Hindus. The Vishwa Shanti Stupa, built in 1969, is one of the 80 peace pagodas in the world built to spread the message of peace and non-violence.

An ancient centre of higher learning – the Nalanda University – is also within travelling distance. The university founded by a King Sakraditya flourished between the fifth century CE and 1197 CE, supported by patronage from the Hindu Gupta rulers as well as Buddhist emperors.

An official guide at the place explained that the complex was built with red bricks and its ruins occupy an area of 14 hectares. At its peak, the university attracted scholars and students from as far away as Tibet, China, Greece and Persia and its architectural uniqueness lay in the way the spaces for learning, residence and meditation were clearly demarcated.

The university was ransacked and destroyed by an army under Bakhtiyar Khilji in 1193. The great library of Nalanda University was so vast that it is reported to have burned for six months after the invaders set fire to it.

Opposite the ruins is a museum that houses various items of historical interest unearthed during the excavations and a little way ahead is the Xuan Zang Memorial Hall which has a beautiful tapestry covering two walls that provide an account of the traveller’s sojourn across India and other countries.

Xuan Zang primarily became famous for his 17-year overland journey to India, which is recorded in detail in the classic Chinese text ‘Great Tang Records on the Western Regions’. The place is immaculately maintained though of course the same cannot be said for any of the towns in Bihar where, for one thing, there is no traffic discipline and you are likely to be either mowed down by a truck or be rendered deaf with the drivers’ habit of sounding their horns at a high pitch and for long periods of time.

One of the other interesting sites is Pawapuri, a holy place for the Jain community located about 101 km from Patna, Bihar’s capital city. It is here that Mahavira attained nirvana or ‘moksha’ in around 5th century BCE. Mahavira, according to a temple priest there, was the last of the 24 ‘tirthankaras’ of the Jain faith and it was here that he was cremated.

There was a great rush to collect his ashes, with the result that so much soil was removed from the place of his cremation that a pond was created. Now, an exquisite marble temple in the middle of a lotus pond, the Jal Mandir, stands magnificently on a rectangular island.