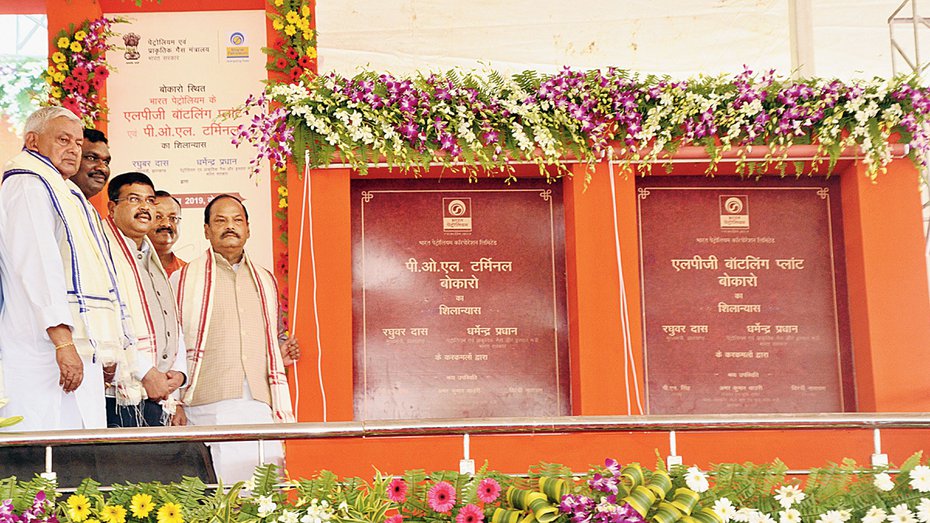 nion minister of petroleum and natural gas and steel Dharmendra Pradhan and chief minister Raghubar Das on Sunday jointly laid the foundation stone of two projects worth Rs 350 crore of Bharat Petroleum Corporation (BPCL) in Bokaro, including a Rs 100-crore LPG bottling plant and a Rs 250-crore petroleum, oils and lubricants (POL) depot, during an event held at the Library Ground here.

Pradhan also promised to expand Bokaro Steel and bridge the “distance” between the steel major and micro, small and medium enterprises (MSMEs) in the industrial district.

The LPG bottling project, to come up on 20 acres provided by Jharkhand government to BPCL in a plot of the Bokaro Industrial Area Development Authority at Balidih, would be completed by September 2020. The POL depot, to come up on 77.5 acres at Radhanagar is likely to be ready by 2022.

Right now, there are three supply depots of BPCL in Jharkhand — Dhanbad, Ranchi and Jamshedpur.

Pradhan said: “The two projects will generate employment for 1,000 people.” He also announced investments worth Rs 10,000 crore in Jharkhand for the near future.

Pradhan spoke about the expansion of Bokaro Steel in tune with Prime Minister Narendra Modi’s plan to increase India’s steel production from the existing 108MT to 300MT by 2030. BSL at present has a capacity of 5.6MT. Pradhan said BSL’s expansion would be carried out on the lines of Jamshedpur (Tata Steel and Tata Motors).

The Telegraph on July 19 and again on August 10 this year had highlighted the problems faced by over 250 MSMEs in Bokaro.

CM Das said that apart from these two projects, 47 investors who had signed MoUs at the global investor summit in Ranchi in 2017 would “invest Rs 4,303 crore on different projects in Bokaro”. “These will provide jobs to more than 20,000 people soon.”

Das added that under PM Ujjwala Yojana, they would distribute second LPG cylinders to 43 lakh women of the state before September 30. Before that, 13 lakh more women will get their first LPG cylinder. At present, 30 lakh women in Jharkhand have one cylinder.